With heavy feeling, Campaign for Uyghurs (CFU) applauds all those involved, especially Dr. Adrian Zenz from the Victims of Communism Memorial Foundation who has presented the largest body of evidence proving the actuality, reality and brutality of the Uyghur genocide. An unprecedented cache of data hacked from police computers in the region includes a huge collection of photographs that show China’s secretive mass incarceration system in East Turkistan, including a shoot-to-kill policy for escaping Uyghurs. After months of investigation to authenticate these images, the “Xinjiang Police Files” provide valuable insight into the internment of Uyghurs and other Turkic groups in East Turkistan. 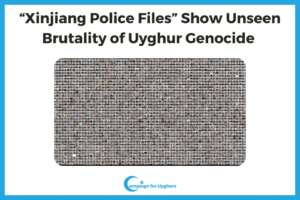 The publication of these reports coincides with Michelle Bachelet‘s recent trip to East Turkistan, with an itinerary China tightly controls that is being manipulated by the Chinese government. As depicted in the cache, China uses both camps and prisons in mass detention of Uyghurs as two separate but related systems, casting serious doubt on its well-honed public narratives about both.

A review of internal police orders, guarding rosters, and never-before-seen images of detainees contradicts the government’s claim that re-education camps built across East Turkistan since 2014 are nothing more than “schools”. Thousands of Uyghurs have been implicated under terrorism charges, which serve as a pretext for arbitrary, draconian sentences that are posted on spreadsheets by the police. There is strong evidence to date that the Uyghurs are being targeted for almost all expressions of their identity, culture, and religion – and a chain of command reaching all the way to Xi Jinping.

Over 5,000 police photographs of Uyghurs were retrieved from the hacked files between January and July of 2018 including 7,000 images of camp activity, including police drills, weaponry such as machine guns and large clubs. A total of 2,884 of these individuals have been detained based on the additional data. China has long-claimed that those in re-education camps are willing students, but the signs suggest that the truth is different.

Executive Director Rushan Abbas said “We are heart-broken, we are appalled, but not surprised. What the world has witnessed today with these unprecedented brutalities is something we have been saying for years. Now, we speak to the conscience of the world and humanity of our leaders. It is time to act! We must take tangible actions against this barbaric regime. Based on this recent development, there are several critical steps that policy makers have to take. First, they need to resoundingly call out Beijing’s direct involvement in the genocide, and how closely Xi Jinping and his regime has directly controlled the whole mechanism of the camps. Secondly, strong sanctions must be implemented against the highest levels of officials within the CCP, together with further ramifications in international relations including divesting and boycotting from China as a whole.”

The European Union, democratic nations and Muslim-majority states should mirror the footsteps of the United States to send a clear message to China that this can no longer be business as usual.

With the High Commissioner for Human Rights Michelle Bachelet visiting the Uyghur homeland, it has become more critical than ever for this trip to be fully transparent. To ignore the crisis Uyghurs are facing, particularly in light of this harrowing look into the police authorities’ brutality, would be a dereliction of duty. The Office of the High Commissioner must release the report on the Uyghur genocide.