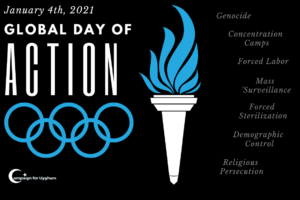 Today activists and organizations will convene around the world to protest the 2022 Beijing Olympics, exactly one month before it begins. These Olympic games are no cause for celebration. Rather, they stand as a monument to inaction and complicity in genocide. Now, the Olympic games are set to be held in China, under a regime that has made it a policy to decimate the Uyghur people, crush the human rights of the citizens of Hong Kong, and continue to oppress Tibetans and Southern Mongolians. The only recourse is a unified response from the international community and a strong grassroots organizing effort to counter these crimes.

Major sponsors of these events must confront an unavoidable reality. The Uyghur genocide continues because of the cooperation of major corporations with the Chinese Communist Party. These interactions normalize the CCP’s crimes and lend it international credibility. Companies like NBC that have chosen to sponsor the Olympics are making a clear decision to place profits over the lives of Uyghur men, women, and children. Leaders from CFU, Hong Kong Watch, Students for a Free Tibet, and other allied organizations will speak in front of the NBC headquarters today on this very issue.

Executive Director Rushan Abbas said “It is now the year of the Olympics to be held in Beijing, exactly one month from today. We have offered the IOC and corporate sponsors every sort of recourse to avoid this moment. We have asked for a new location for the games, for an open dialogue with the IOC, corporations not to sponsor the genocidal games, and for nations to withhold their diplomats. All this would avoid legitimizing the CCP’s genocidal crimes against the Uyghurs. We are grateful to the governments that have heard our cries, and we continue to implore those that have not to listen. At what cost will these games be held? How many Uyghur families were destroyed, men made slaves, women sterilized, and people tortured? All of these crimes will be done, this genocide continued indefinitely, just so corporations can make money and the CCP can enforce their reign of terror.”

There is still time to act. The Berlin-Beijing Campaign continues to call for nations to join the coalition of a diplomatic boycott. Advocacy organizations are still demanding corporations, who have largely remained indifferent to the Uyghur genocide, hold the CCP accountable for its crimes. As a new year dawns, it is no time for despair. Instead, today is a day of action, a day of hope, and a day of resolve. Genocide, and those that perpetrate it, will not be the victor of this or any other year. Instead, humanity will triumph and a bright day will soon dawn with your voice and action!