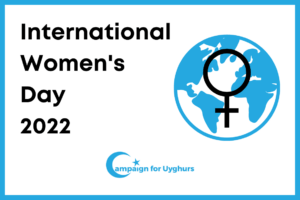 Campaign for Uyghurs calls on the citizens of the world to join Uyghur women in solidarity against China’s genocide in East Turkistan. To this day China continues its brutal repression of Uyghurs through the mass arbitrary detention of millions in concentration camps and forced labor camps.

Testimonies from former concentration camp detainees depict how women have been ruthlessly abused in China’s camps. Former camp detainee Tursunay Ziawudun spent nine horrific months inside China’s camps. Tursunay, who fled East Turkistan, and now resides in the US, said women were taken from their cells “every night” and raped by one guard or a gang of masked Chinese men. “Tursunay says she was tortured and later gang-raped on three occasions, each time by two or three men.” Another former camp detainee, Zumrat Dawut, says she was forcefully sterilized and “was forced to pay a fine of more than $2500 for breaking China’s family planning law by having three, not two, children.”

The impact of the Chinese regime’s genocide on Uyghur women cannot be understated. The use of forced sterilization, IUD placement, and abortions is designed to control women’s bodies to achieve the goal of reducing and controlling the Uyghur population. The horrific violence used against Uyghur women in the form of mass rape and sexual violence is yet another tactic designed to carry out genocide, as a tool to instill fear. Mass sterilization, forced marriages, and sexual violence are all cruel weapons of genocide that Uyghur women have had inflicted upon them.

Executive Director Rushan Abbas said today that “We must do our utmost, in all spheres, to raise awareness of the detrimental conditions that Uyghur women and the Uyghur people as a whole are subjected to on a daily basis. Uyghur women have been targeted specifically by the Chinese Communist Party in order to decline and eventually rid the Uyghur population in East Turkistan.”