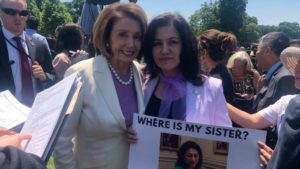 China’s government says it’s refashioning the camps it uses to detain Uyghur Muslims in the Western Province of Xinjian into training centres for farmers and herders.

China has been under intense pressure to end the incarceration of what the UN estimates is between 1 million and 3 million Uyghurs.

Rushan Abbas is a Uyghur leader now based in the US

She has been touring Australia urging officials to implement sanctions on China.