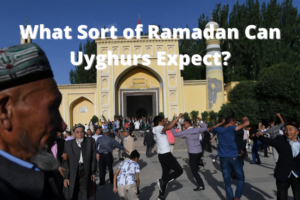 Ramadan Mubarak! Campaign for Uyghurs (CFU) would like to congratulate all in the Muslim world for reaching the holy month of Ramadan. This Ramadan–just like every Ramadan for the past several  years–Uyghurs are forbidden to worship. All aspects of Islam are banned, while China is waging war on the religion. Now, more than ever, the Muslim community must be called upon to pray for and support their Uyghur brothers and sisters.

The Chinese government has for years prevented Uyghurs from celebrating religious holidays, particularly the most holy days such as Ramadan. To add insult to this injustice, the CCP selectively deploys Islam to paint a sham picture. Staging theatrics where Uyghur actors were called to pray at the mosques and to fast in some areas during Ramadan last year. At the Idkah Square, Uyghurs were organized by the government into Sama and even danced by imams. China selectively weaponizes Islam in their propaganda platforms as China will again, most likely prepare to welcome diplomats and journalists from some Muslim countries during Eid al-Fitr. While the Chinese regime demolishes thousands of mosques in East Turkistan, they are building the largest mosque in Nigeria.

In the run-up to the holy month of Ramadan, expect China to further strengthen its stranglehold over Uyghurs and Islam, growing its propaganda and lies to distract the world from the truth. Uyghurs are unable to even identify as Muslims let alone practice Islam. They are debased, called criminals, and seen as subhuman. The Chinese government aims to deceive the Muslim world again, but the evidence is overwhelming and the world cannot be fooled. We must look past the glamor of ‘happy dancing Uyghurs’ during this holy month and see through the CCP’s deceit, propaganda, and staged tours.

Executive Director Rushan Abbas said today “The CCP has not only been able to crack down on religion publicly, but has been able to quash religious practice privately. QR codes, smartphone apps, cameras, and the millions of CCP officials are forced to live with Uyghurs, monitor each and every move a Uyghur makes, from expressing the Uyghur culture to religious practices. Any hint of Islamic practice is deemed illegal. It is every Muslim’s responsibility to defend their faith and not to be complicit on Beijing’s eradication of Islam.”

While Muslims around the world prepare for Ramadan, we should ensure that Uyghurs are kept in mind and in prayers. We should look at ways to raise awareness within our networks to bring about positive change and relief for the Uyghur people. Consider making a donation to Campaign for Uyghurs so that we can continue to fight for the rights and freedoms of the people of East Turkistan.