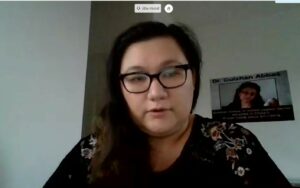 Thank you Babur for the introduction, and thank you Campaign for Uyghurs team for providing us with a platform to speak about our struggle. All six of us here today have a common struggle, representative of the experience of millions, and we are those who have decided to speak out as the only hope for saving our loved ones. Our pain has been compounded over multiple years of battle for the human dignity that our loved ones deserve.

On September 11, 2018, my mother, Dr. Gulshan Abbas was taken from her home to the concentration camps by the Chinese police. For over two years we had no information whatsoever on why she was detained,  her whereabouts, or her condition. But then just recently, we learned that she was sentenced by the Chinese regime in March of 2019 to 20 years in prison on fabricated charges. She is not a famous scholar or renowned intellectual, but her sacrifice for her family and her compassion for her people have been her honor, and her life is equally valuable to any. When I was a little girl I often woke up in the morning just to find her already left home to help those people in need. I often fall asleep waiting for her to come home from the clinics. A dedicated soul like her was brutally targeted. She was used as collateral to punish us- the ones who dare to speak the truth. She does not have an inch of malice in her, so the fact that a benevolent human-like her suffering in a jail cell, helpless and voiceless, makes me despondent. She is a retired medical doctor, a non-political individual, speaks fluent Chinese, and has always lived a quiet life. She is now in prison, with no visitors allowed and having no access to lawyers. Just imagine being in a cell without anyone coming to see you for so long. I fear for her life as she carries multiple health issues that require medication and monitoring.

My sister and I both have small children. Since the day that my mom disappeared, instead of focusing on raising our kids, we looked for our mother, we sought answers about her whereabouts & what had happened to her. I often found myself walking in the halls of congress, a place I never imagined I would be, seeking help. I never could have imagined this lonely and painful path for myself. We are tormented by the lack of news and the inability to hear her voice. All we want is for her to be there to give us guidance and be part of raising our kids. But the Chinese government took her away from us. They are depriving people of their families and their happiness.

Uyghurs in the diaspora are living in torment, having to face the torture of no news or hearing news from afar about family members dying. Every time this happens, it sends a ripple of fear throughout the entire community, and this fear of repercussion has been used to attempt to keep us silent about the Chinese government’s crimes. The impact on our community mentally and physically is devastating. Uyghurs are being enslaved in factories across China as we speak. Families are forcibly separated, kids are in orphanages. So many innocent people are being sent to the concentration camp while the world is idle making me realize the grim reality of how powerful this evil that we are fighting against truly is.

We are often unable to escape the feelings of guilt, even though this guilt should be on the Chinese authorities. We worry that our silence will not help our loved ones, and also that our voices speaking out might cause them further harm. But we cannot be silent.

I want you to take a look at the panelists today. 4 out of 6 of us’ parents are in prison. 2 of us are still looking for answers. These are renowned scholars, intellectuals & professionals. Do you see a pattern? If you don’t call this systematic oppression and elimination of an ethnic group, then what do you call it?

I want to take this opportunity to say this to President-Elect Biden and the incoming administration:

My mother’s case is just the tip of the iceberg. As millions of others suffer similarly, it is clear that action at the current time is crucial. My mother’s case is one that clearly demonstrates the Chinese government’s refusal to participate in genuine dialogue. While the Chinese authorities have moved away from their harsher diplomatic style in the past few months and now give lip service again to a need for dialogue with the United States, the transparency and regard for human rights needed to be part of such conversations does not exist. If the Chinese government wants to clear their name and if it is truly a country governed by the rule of law like they claimed, then they must free our innocent loved ones that are unlawfully imprisoned. The U.S government must demand that the CCP shut down those brutal concentration camps in the 21st century and free imprisoned scholars, intellectuals, writers, and educators. The Chinese authorities must answer for why children and grandchildren are living lives of torment without their parents and grandparents. I sincerely hope that our government continues to make building an alliance to confront this evil a priority, and the perpetrators must face justice.