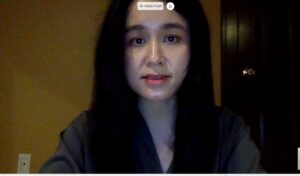 Thank you all here to attend this event. My name is Akida Pulat, I’m the daughter of Rahile Dawut, an eminent scholar of the Uyghur people, and an excellent mother who has been detained by the Chinese government since December 12, 2017. My mother is a professor at Xinjiang University. Born in Urumqi in 1966 to a family of intellectuals, she became one of the first Uyghur women to receive her Ph.D. in Beijing Normal University. She was also a visiting scholar at such institutions as the University of Pennsylvania, Indiana University, the University of Washington, and the University of California at Berkeley. She has received many awards from China’s Ministry of Culture and She founded a folklore institute and shared her work in Europe and the United States, becoming a guide to many foreign scholars. She is an excellent scholar, but she is also a wonderful person. For my family, she is a responsible mother, wife, and daughter. For her students, she is a kind and caring teacher. For her friends, she is a humorous, open-mind good person with a great personality. The people like her should end up having a wonderful life in her age. But instead, she spent her mid-50s in the detention center, camp, or prison.

In a place that there is no freedom, no hug from family members, no music, no fresh air, and no all the good thing that you are currently enjoying right now. She disappeared on December 12, 2017. I haven’t heard from her or talked to her until now. I later knew she was being detained. I can’t let her stay in that place anymore, so I became an activist. I am not the only victim. All the speakers here are not the only victims. Human rights groups estimate that a million people in China are detained in so-called “re-education camps.” Uyghur intellectuals were intern, imprisoned, or forcibly disappeared since 2017.

Uyghurs have been forced out of their homes to work in factories that supply major global brands. Dozens of mosques and graveyards are being destroyed. The Chinese government denied its action and denied the genocide. But for me, a daughter that can’t talk to her mother for three years and is spending day and night speaking up, it is a genocide. For all the people that lost their freedom for several years and even longer in the camp, detention center, and prison, that is a genocide. For a law-abiding citizen who accidentally ended up in prison just because the government suspect she commits a crime without any clear evidence, it is a crime.

For all the people living in the so-called reeducation centers, without freedom, fresh air, and a hug from the loved ones, it is a genocide. Not to mention we hear news about people dying in that prison and camp. There are several ways people from all over the world can help on the Uyghur issues: (1) Please join us in raising awareness. It can be a subtle thing such as signing a petition related to the Uyghur genocide or forced labor or telling your friends, relative,s, and colleagues about what is happening on Uyghur. Social media is a powerful tool in raising awareness of the Uyghur. I hope people can share the testimonies or articles related to the Uyghur genocide on their social media so that more people can know what is happening and take action. (2) Write to your local officials and inform them about the issue, such as Forced disappearance, unlawful detention, forced labor, and etc. (3) This is what I hope the foreign country can do-that is to cause China economic pain until it reverses course.