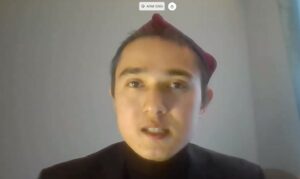 I came to the US as an international student at my University. My father was a well-known TV-producer and Journalist. My mom was a math teacher. Like many Uyghurs, in 2017 I lost contact with my parents while I was still planning on going back after my graduation from University. A year later I learned that my father was detained around March 2018 and my mom was sent to the concentration camp at the end of 2017. Yet I only learned that more than 6 months after their detainment.

For about a year, there was no information about my parents at all. I spoke to the media and in early 2019 met with US Secretary of State Mr. Pompeo, representing the Uyghur students in the US. Months later I learned that my mom was released under critical health condition after being detained in the camp for over a year, had major surgeries, and months of hospitalization after being released. I still don’t have any contact with my mom or other family members because all my family signed a paper saying they will not have any contact with me and I don’t know what will happen to them if I contact them.

Chinese authorities gave very different accounts about my father, government first said he was sent to prison for  “terrorism” even though government records show they rewarded him as one of 10 best journalism workers in the region just before his detained for his works like “Let the world full of love” and others and Chinese Government’s response to UN regarding my father’s whereabouts also very different, local authorities also gave different claims, linking his detainment for him being a well-known journalist and sending me my University tuition.  To this date, I still don’t know where my father is or even if he is alive since no one ever saw him or heard from him in the last three years and no one knows where he is.