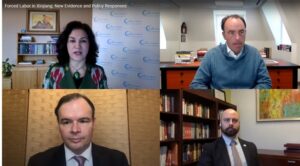 (Rushan Abbas’s remarks) Thanks, Murray, and Victims of Communism for having me today, it is an honor to be here with such esteemed colleagues. I want to begin my remarks today by thanking Dr. Adrian Zenz for his commitment to researching this crisis. His work has been truly vital to letting the world know what is happening to the Uyghur people, and this latest report reveals more of the ways that the Chinese regime has structured modern-day slave labor as part of its genocidal campaign in the Uyghur homeland.

As an Uyghur, and someone whose innocent sister, a retired medical doctor, is detained in the concentration camps as retaliation for my advocacy work, and is quite likely being forced to make your clothing, it is very horrible to be constantly confronted by the realities of Western complicity in China’s crimes. As Adrian’s report confirms, the use of Uyghur slave labor makes this complicity enormously widespread. Companies want to be allowed to leave their profit margin unaffected. If these companies were forced to sit in a room with the Uyghur, Kazakh, and other victims of these forced labor schemes, with people who were forcibly separated from their children, then would they be quicker to act?

We are dealing with a regime that has chosen the worst parts of human history as its own model. While being forced into labor schemes as part of the concentration camp system, or from outside it, Uyghurs are also having their identity and culture brutally erased. While the world has spent the past 3 years debating the implications of the Chinese regime’s actions, Uyghurs are dying. Yes, they are dying. Some even kill themselves to avoid going to the camps. This is genocide, and slave labor is a convenient side-product of this evil campaign to eliminate the Uyghurs and force them to choose between becoming Chinese as defined by Xi Jinping, or death. Children are being placed in the care of the state to be brainwashed as their parents are removed from their homes and sent to pick cotton or to be a prisoner in the camps, or both. There is another word for what the Chinese State is doing: kidnapping.

Many people have justified slavery in the past, leaving an enormous stain on human history. We should never take the side of pragmatic complicity as concerns a situation like the destruction of an entire people group. Have we still failed to learn from the ugliest parts of our own past? Many of us read about atrocities and ask, “How could anyone allow this to happen?” But now, in the 21st century, we see human beings forced into the back-breaking work of picking cotton. Forced into concentration camps with crematoria nearby, while their hair is harvested to make wigs and the regime that has targeted them profits off of their blood, their sweat, and their tears!

This Center for Global Policy report further lays out what should horrify the world: using the disturbing propaganda term “poverty alleviation”, China is lining the pockets of regime officials while alleviating themselves of what they view as a problem to be exterminated. The world also seems content to ignore the words of Chinese officials themselves. One of the Chinese officials Hu Lianhe said that the Uyghur issue must be taken to the final solution stage. Chi Haotian, Minister of Defense and vice-chairman of China’s Central Military Commission has stated publicly that there are lessons to be learned from Nazi Germany and the mistakes that led to their loss. And China has learned very well. After decades of courting Western business and investment with lip service to human rights, they have continued with their barbaric oppression and expansionist imperialism. The worst of colonialism is being repeated. Are we to expect a miraculous change from the course that the CCP has always set through the brutal repression of its own people?  The Chinese leaders take the benefits of democracy to spread their authoritarian model and ultra-nationalism and racism across the globe.  If we fail to challenge Communist China on this terrible atrocity with the determination to stop it, it will be the beginning of darkness for accountable democracies as a totalitarian government effectively utilizes mass surveillance and repression to instill fear at home and abroad. How can we critique any human rights abuses anywhere in the future if we neglect to address this?

As Adrian says in his report, ”in a system where the transition between securitization and poverty alleviation is seamless, and where the threat of extralegal internment looms large, it is impossible to define where coercion ends and where local consent may begin.”

In addition to normalizing slavery in the modern age, the CCP is inflicting other atrocities on the Uyghur people. Forced marriages. Mass rape. Orwellian surveillance. Forced abortion and sterilizations. Beatings. Torture. Child abduction. Brainwashing. Organ harvesting. Crematoria. It is genocide. The purpose of revealing forced labor schemes means nothing if we do not allow these revelations to guide and inform the process of decoupling from this evil regime. We live in a world where the oppressor is encouraged to continue, through such incentives as the business of large corporations, or being awarded the privilege of hosting the Olympics, while those who advocate for human rights, like myself and my colleagues, and millions of either innocent human beings, deal with threats on our lives and harm to our families as a result of the CCP’s retaliatory tantrums. We must speak to the Chinese criminals in the CCP in a language that they understand while continuing to demonstrate that there are people all over the world who know the value of human life.

For this reason, groups like the Coalition to End Uyghur Forced Labour, which is asking for global brands to sign on to the call to action, are essential. There are specific steps that businesses should take to extricate themselves from the use of Uyghur slaves. I often say that addressing forced labor in East Turkistan is the bare minimum of what should be done to address the genocide. That is true, but it is also a very impactful step. The CCP is trying to make China a country with no religious belief or morality. Therefore, the only language that they speak is that of money, while human dignity is of no value.

If we fail to confront this evil, it will be disastrous, not only for the Uyghurs, but for the entire world. I want to close by asking all those listening to consider how they can be involved in ending Uyghur slavery, stopping the genocide, and keeping the CCP from being the ones to set the course for the next world order. History will not be kind to those who choose complicity. Thank you.