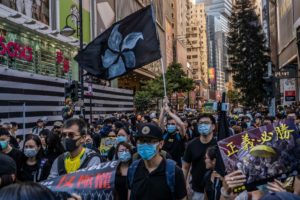 Hong Kong protesters marching in the Causeway Bay district, Hong Kong, demonstrating against the Chinese government which is stripping them of their freedoms and democratic rights. Photograph by Lam Yik Fei for The New York Times

Today is a day for solemnity. It need not be the end of the struggle, but we at Campaign for Uyghurs mourn with the brave citizens of Hong Kong today, and brace for what comes after the end of two systems. Hong Kong was the last bastion of freedom for many people in China, and was an important safe haven for all those who stand for human rights activism, for those who are true followers of the law, for freedom of the press, for freedom of religion. The last place near Beijing that would call out its evils without the swift repercussion of the Chinese regime’s evil, heavy hand. We have faith that the people of Hong Kong will continue to find a way to fight for what they deserve: a life free of Beijing’s oppression.

Just as the courageous citizens of Hong Kong have raised their voices for the suffering Uyghurs, we are with you as the struggle continues in different forms. Brave pro-democracy activists in Hong Kong have said that they didn’t want Hong Kong to become the next East Turkistan. While the Chinese government continues to ramp up its campaign of disinformation in the wake of Dr. Adrian Zenz’s important report proving their implementation of genocide, they continue to plaster lies all over their propaganda networks. If they have created a Utopia, why does no one want to be part of it?

Now Hong Kong will most definitely suffer as East Turkistan has, and we must not abandon them to this fate. While China seeks to distract the international community, they have already begun to carry out arrests under their new national security “law”. This July 1, the anniversary of the official founding of the Chinese Communist Party, we reaffirm that the Chinese regime has caused, and is continuing to cause the most harm to mankind of any nation in the modern age. They are a scourge on humanity.

We call on the international community to welcome with open arms those fleeing their collapsing lives, and to continue to hold China accountable for breaking its agreement. We will not be silenced by the vile deceptions of the Chinese regime as it seeks to expand its empire of darkness. We call for Freedom for the people of Hong Kong and the Uyghurs of East Turkistan, for true liberty for all.