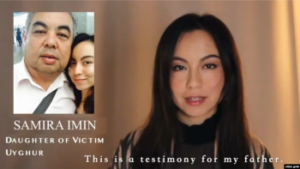 The last time Samira Imin had contact with her father was April of 2017. It was her father’s birthday. The two exchanged pictures and messages on the Chinese social messaging service WeChat.

Weeks later, her father disappeared. He became one of over a million ethnic Uyghurs to be detained in so-called “re-education camps” in far western China.

Today, the 27-year-old Imin is using social media to bring attention to her father’s case — and the situation of others like him.

The Uyghurs are a Turkic ethnic group. Most Uyghurs are Muslim. The language they speak is related to Turkish and other Central Asian languages.

About 12 million Uyghurs live in China’s Xinjiang Uyghur Autonomous Region. Since early 2017, rights groups and other experts estimate that over 1 million Uyghurs and other Muslim minorities have been detained in camps across the area.

China’s government has said Xinjiang faces a threat from Islamist militants and separatists. Officials have said they are seeking to end extremism and violence in the area through education.

READ THE FULL ARTICLE AT VOA