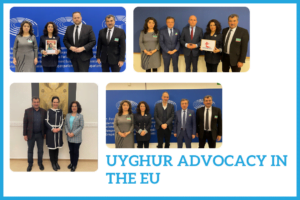 From January 31 until February 10th, Campaign for Uyghurs (CFU) and the Center for Uyghur Studies (CUS) visited key allies in the European Union to generate support for the Uyghur cause. These visits and presentations were done in the wake of the Beijing Olympics, an event that is occurring irrespectively of the ongoing Uyghur genocide being conducted by the CCP. The European Union remains full of audiences and allies who are critical in this fight, and it was the great privilege of CFU to be able to reaffirm existing relationships while cultivating new ones.

Executive Director Rushan Abbas and Abdulhakim Idris, the Executive Director of CUS, met with multiple members of the European Parliament, including MEP Raphael Glucksmann, MEP Engin Eroglu, and MEP Ilhan Kyuchyuk. It was a great honor that Mr. Dolkun Isa, the president of the World Uyghur Congress, traveled from Munich to meet with the CFU and CUS team. They discussed the importance of the EU in the global fight against forced labor, a direct impact of the Uyghur genocide around the world. Their support helps ensure a unified response from the European continent, an integral partner in the fight for clean trade and basic human rights.

In Belgium, Rushan Abbas, Abdulhakim Idris, and Jawad Mir, the Director and Producer of the documentary “In Search of My Sister”, attended screenings of the documentary hosted by the European Foundation for Democracy and the US mission to the EU. In Croatia, they participated in a roundtable discussion at the Human Rights House of Zagreb and other important meetings and briefings. In the Czech Republic, Ms. Abbas had the great privilege of meeting with Bishop Václav Malý and the President of the Czech Parliament, Ms. Markéta Pekarová Adamová. With both of them, she spoke about the grave humanitarian threat posed by the CCP’s repression and genocide. In Slovakia, they met with MEP Miriam Lexmann and Slovakian Parliamentarians Andrej Stančík and Jaromír Šíbl. Finally, in the Netherlands, they were able to meet with Parliamentarians Agnes Mulder, Ruben Brekelmans, and Don Ceder. They also met with the Chargés D’affairs Marja Verloop. It was a great honor to be invited into the American embassies of these nations, where the Uyghur cause was able to receive international attention.

Ms. Abbas said of their activities “It is always important to share the story of the Uyghurs and educate the general public, as well as briefing the politicians with the current situation in East Turkistan. It is a great pleasure to do so with those individuals who can help us assemble the sort of international response that is necessary to bring this genocide to an end. I wish to express gratitude to all those who granted us their time, and pride in those that are now part of the fight for Uyghur freedom. Meeting with the members of the European Parliament, Human Rights organizations, Think Tanks, as well as the diplomats and representatives in the EU, has been an extraordinarily rewarding opportunity. ”

As the Beijing Olympics begin to wind down, the spotlight must remain on the CCP and their crimes. We must ensure that our coalition continues to grow all around the world and that there is a guarantee of equal rights for all Uyghurs that face destruction. It is with hope and dedication that we look forward to that guarantee being realized.