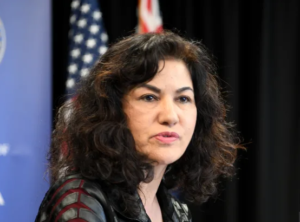 A leading international Uighur activist is urging Australia and other western democracies to use trade to punish China over its human rights record, even if it comes at an economic cost, in a bid to force Beijing to end its appalling treatment of minorities.

Following meetings with MPs at Parliament House on Thursday, Rushan Abbas said Australia should be part of efforts to adopt a global Magnitsky Act that directly targets human rights abusers. She was referring to a 2012 bipartisan US bill, named after a Russian accountant who died in a Moscow prison, aimed at punishing officials responsible for his death.

The 3 million Uighurs being detained in China’s western province of Xinjiang was this century’s biggest atrocity and the “largest incarceration of one ethnic group since the Holocaust”, Ms Abbas told reporters.

But she said their plight was not getting the attention it needed because China was using its economy and market power to silence criticism.

“China has basically become a power able to strong arm the world,” she said. “Since Australia has so much trade and economic leverage over China, they should use that and push the human rights issue of the Uighurs. Every time there is some kind of foreign policy or trade negotiation, the Uighur issue should be there, linked together.

“Unless you use trade and the economy to defend those millions of voiceless peoples’ rights, nothing is going to work. Doing the right thing comes at a price … but if Australia and the other economically independent countries start to take action, that is going to make a big impact.

“Continuing to do business is enabling China to murder my people.”

Ms Abbas, who has lived in the US since 1989, said after she publicly spoke out about the treatment of the Uighurs in September 2018, her sister and aunt were abducted six days later in China in retaliation. No one has heard anything about her sister since.

“I don’t even know if my sister is still alive,” she said. “I hope she is. I hope she is staying strong.”

Her visit to Canberra comes a day after the government announced a parliamentary inquiry into establishing a sanctions regime targeting individual human rights abusers.

Such a scheme could be modelled on the Magnitsky Act – named in honour of the accountant jailed after exposing government fraud – that lets the US to impose travel bans on human rights offenders and freeze their assets.

“[In] Chinese culture, they don’t care for any kind of statements or written criticism, other than just the naming and shaming publicly,” Ms Abbas said.

“We cannot put Xi Jinping in jail or International Criminal Court,” she said, referring to the Chinese president. “At least we can implement this law we have in place that is set up to target sanctioning the perpetrators of human rights abuses.”

While she did not advocate a boycott because that only punished athletes, Ms Abbas said China should be stripped of hosting the 2022 Winter Olympics, as well as the 2021 FIFA Club World Cup, given the games’ ideal of harmony and inclusion.

“How long are international entities going to continue to reward a country committing genocide?” she asked.