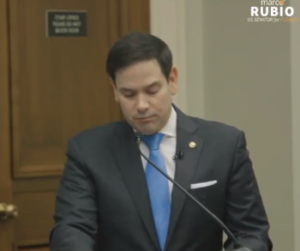 US lawmakers on Wednesday proposed a ban on most imports from China’s Xinjiang region, charging that goods produced by Uighur forced labourers were easily making their way into the United States.

The United States already bans products made through slavery. but with China holding more than one million Uighurs and other Muslims in camps in Xinjiang, lawmakers said that forced labour was interwoven into the region’s economy.

“These practices in Xinjiang are one of the world’s largest human tragedies. It remains unimaginable, frankly, that this is happening in 2020,” Senator Marco Rubio, a Republican sponsor of the bipartisan measure, told reporters.
READ THE FULL ARTICLE AT HONGKONG FREE PRESS

Senator Rubio says @CECCgov report “should leave zero doubt about the evil policies of the communist party of #China” towards religious and ethnic minorities. These policies “injected forced labor under the Christmas tree.”