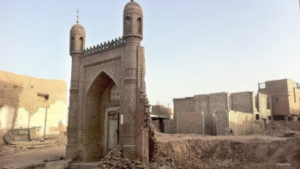 WASHINGTON – A U.S. State Department official accused China of attempting to erase the Muslim identity of Uighurs by seeking to demolish or close places of worship in Xinjiang in northwest China.

The official, who spoke to VOA on the condition of anonymity, said the Chinese Communist Party in its campaign against the Uighur minority has removed religious symbols from places of worship, imposing strict surveillance on them.

“As part of its ongoing attempts to eradicate the Islamic faith and “re-educate” Muslims, Beijing has closed or destroyed mosques, shrines, burial grounds, and other Islamic structures, perhaps more,” the official told VOA.

“Mosques permitted to remain open have been stripped of certain features like minarets and domes and are heavily monitored by surveillance cameras and security personnel,” the official said, adding that Beijing’s acts have denied Muslims the ability to practice their faith in public.