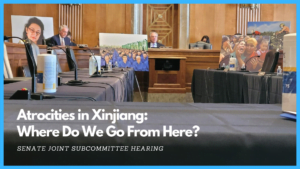 Campaign For Uyghurs (CFU) Executive Director Rushan Abbas testified today alongside Dr. Adrian Zenz and Dr. Sophie Richardson on the ongoing Uyghur Genocide. They spoke on the developments in East Turkistan regarding declining birth rates, concentration camps, forced labor, and the specific threats facing women and Dr. Gulshan Abbas’s case. This hearing falls two days before her 59th birthday, which marks the 3rd year that she is spending in the dark dungeon without her family. The United States is a critical ally in the fight to restore the human rights of Uyghur people, and Campaign for Uyghurs is grateful for the opportunity to inform the Senate about their role in combating the Uyghur genocide and associated policies.

Ms. Abbas testified “Orwellian surveillance, slavery, forced abortions and sterlizations,  institutionalized mass rape, torture, concentration camps, crematoria…we know where this is leading.  We swore ‘Never Again’ many years ago, but we are not living up to that promise with the right sense of urgency. The CCP’s denying journalists access to the region means that the Chinese regime has been able to control the narrative surrounding their genocidal crimes, especially within their own borders. This has led to a high number of genocide denialists, who target survivors and activists, attempting to undermine their stories, and even threatening their lives.”

This hearing comes on the heels of the independent Uyghur Tribunal in London, where survivors testified to the crimes being committed in the concentration camps in East Turkistan. The inspiring bravery of these survivors was supplemented by expert testimony that conclusively described the events transpiring within China as a genocide. There is now a dire need for international action in order to apply pressure to the Chinese state. We must demand independent journalist access to the region, and an independent UN investigation so that the truth can be fully derived.

Dr. Adrian Zenz testified “Xinjiang no longer publishes reports of birth rates or population counts, breakdowns by region or ethnic group, leaving researchers in the dark and preparing the region to cover its tracks as a slow genocide is unfolding. I urgently ask the US Senate to pass the Uyghur Forced Labor Prevention Act, and the US government enacts further economic and or diplomatic sanctions against the Chinese government.”

Dr. Sophie Richardson stated “First, Beijing’s extreme repression and surveillance make human rights due diligence expected of companies, from apparel to silicon sectors, and from domestic firms to foreign ones, not currently possible.” She added, “We welcome the administration’s efforts with respect to targeting coordinated sanctions and the unprecedented efforts by Congress to end Uyghurs’ nightmares. But there is so much more to do.”

The Biden administration should move to offer the services of the embassy in locating missing relatives for those Uyghurs living in the United States. The US Embassy in China can request access to see individuals like Dr. Gulshan Abbas, Dr. Rahile Dawut and Yalkun Rozi in order to assess wellbeing. President Biden can raise this case directly with Chairman Xi and the Chinese as an example of how U.S. citizens are being retaliated against.

The administration must also help to enforce import bans, while working for the passage of the Uyghur Forced Labor Prevention Act. These actions, as well as helping to secure more refugee protections for Uyghurs fleeing the genocide, will help secure the United States place in history as an ally of the Uyghurs.

You can watch the hearing here: https://www.foreign.senate.gov/hearings/atrocities-in-xinjiang-where-do-we-go-from-here-061021