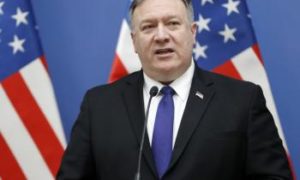 The Chinese government has instituted a highly repressive campaign against Uighurs, ethnic Kazakhs, Kyrgyz, and other members of Muslim minority groups in the Xinjiang Uighur Autonomous Region (Xinjiang) that includes mass detentions in internment camps; pervasive, high-tech surveillance; draconian controls on expressions of cultural and religious identities; and coercion of individuals to return from abroad to an often perilous fate in China.  Today, I am announcing:

The United States calls on the People’s Republic of China to immediately end its campaign of repression in Xinjiang, release all those arbitrarily detained, and cease efforts to coerce members of Chinese Muslim minority groups residing abroad to return to China to face an uncertain fate.  The protection of human rights is of fundamental importance, and all countries must respect their human rights obligations and commitments.  The United States will continue to review its authorities to respond to these abuses.