By Gavin Fernando – One of China’s most disturbing policies shocked the world when it made headlines. The full extent of it is even worse than we imagined.

Western coverage of one of China’s worst human rights abuses – the mass detainment of over a million Muslim Uighurs – has increased over the past year.

But lesser reported on is a disturbing policy implemented in the northwest region – a forced-living arrangement between Han Chinese men and Uighur women that’s been likened to “mass rape”.
The Government claims it’s designed to promote harmony between the different cultural groups. But activists tell a different story.

In November, various Western media outlets reported that Han Chinese men had been assigned to monitor the homes of Uighur women whose husbands had been detained in prison camps.
The reports came out after an anonymous Chinese official gave an interview with Radio Free Asia, confirming the program but denying there was anything sinister about it.
As part of the “Pair Up and Become Family” program, Han Chinese men stay with and sleep in the same beds as Uighur women.

According to the Chinese Government, the program is designed to “promote ethnic unity”.
But to Rushan Abbas, a Uighur activist whose family members have been detained in the Xinjiang camps for more than a year, it’s nothing more than systemised rape – part of the Government’s brutal ongoing crackdown against the country’s ethnic minority.

“This is mass rape,” she told news.com.au. “The Government is offering money, housing and jobs to Han people to come and marry Uighur people.

“Neither the girls nor their families can reject such a marriage because they will be viewed (by Chinese authorities) as Islamic extremists for not wanting to marry atheist Han Chinese. They have no choice but to marry them.

“(The Han Chinese) have been raping Uighur women in the name of marriage for years. It took more than a year for the media to pick that up.” 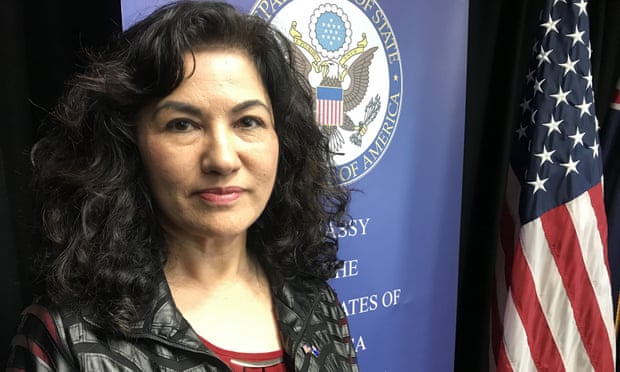 While the Chinese Government claims the program is about promoting unity, it also allows officials to keep a close eye on the Uighurs who have spent decades living under increased surveillance. Human rights organisations have slammed the program, saying there is “no evidence that families can refuse such visits” and describing it as “deeply invasive forced assimilation practices”.

Last month, a Chinese official told Radio Free Asia the purpose of the program was to “help the families with their ideology, bringing new ideas … they talk to them about life, during which time they develop feelings for one another”.

“Normally one or two people sleep in one bed, and if the weather is cold, three people sleep together,” he said, adding “it is now considered normal for females to sleep on the same platform with their paired male ‘relatives’”.

They claimed the “relatives” and their female hosts sleep at least a metre apart at all times and that male Communist Party officials have never tried to take advantage of women.

Ms. Abbas says this is all lies. “Tons of pregnancies are coming up,” she said. “Tons of forced abortions. This is mass rape disguised as ‘marriage’. Uighur girls are forced to marry Han Chinese men with government gratifications.”

WHY IS THE CHINESE GOVERNMENT TARGETING XINJIANG?

Hostility towards the Uighur people stems back decades but has increased sharply under China’s current leader Xi Jinping.

The crackdown on Xinjiang is partly fuelled by Islamophobia.  Mr. Xi’s government is increasingly cracking down on religious worship across the country, but Muslims have been especially targeted.
The crackdown is also economic. Mr. Xi has a grand plan in motion to put his country at the economic and political centre of the world.

These ambitions are best summed up by the Belt and Road Initiative, a trillion-dollar project that seeks to connect countries across continents on trade, with China at its centre.

Geographically, Urumqi – the capital of Xinjiang – is a crucial intersection point in the “Belt” part of the project.

The last thing the Chinese Government wants for such a crucial region in this plan is unrest or the loss of control. And that’s where the intense security crackdown comes in.

This explains why the crackdown escalated around five years ago, in line with the Belt and Road Initiative taking off.

Ms. Abbas has long spoken out against the human rights abuses in Xinjiang – a move that has had disastrous consequences for her family in China.

In September last year, she spoke about the conditions in the camps while seated on a panel hosted by a Washington think tank.

Six days later, her aunt and sister both disappeared at the same time – despite living 1400 kilometres away from each other.

“My sister is a medical doctor. Their ‘vocational training’ shouldn’t apply to her. My aunt is a retired schoolteacher. Both of them went to Chinese school and speak fluent Chinese. They shouldn’t have been targets,” Ms. Abbas said.

Even from her home in Virginia, US, Ms. Abbas says she feels unsafe. “There’s always that concern. But we all live once and we all die someday. If I only think about my own safety and my own life, who will do the right thing and speak up about this atrocity? If my sister is sitting in some cell block facing torture and abuse, I’m sure she is hoping that I will be doing something to save her and other millions of Uighurs, so I have to keep doing what I’m doing.”

‘MASS EXTERMINATION IS NEXT’

The camps in Xinjiang are given various names in the media. Some refer to them as “mass internment camps”. Others call them “surveillance facilities”, “re-education camps” or simply “detention centres”.

But Ms. Abbas repeatedly refers to them as “concentration camps” and warns if the Western world doesn’t intervene, the mass detention will turn into mass murder.

“Our children are unable to speak our language and understand our culture,” she said. “They are taken to state-run orphanages and are completely indoctrinated.

“I’m afraid this will turn into mass extermination. There’s nothing better to describe what’s happening in Xinjiang than concentration camps. What are we waiting for? Mass executions and gas chambers before we take action? What is it going to take to have the leaders of world communities – particularly Western democratic countries like Australia – to act? Executions? Is that what it’s going to come down to?”

A WARNING TO AUSTRALIA

The Morrison Government has spoken out against China’s treatment of Uighurs in recent months.

In a speech to the US Studies Centre in October, Foreign Minister Marise Payne warned Australia would not hesitate to call out China’s human rights abuses.

“We must respect each other’s sovereignty but we will consistently continue to raise issues such as human rights, including with China,” Senator Payne said.

“Such ill-advised remarks will not help to improve or grow relations with China. We have lodged stern representations to the Australian side and pointed out the inappropriate nature of her conduct,” Mr. Geng said.

“We have repeatedly stated that a sound and stable China-Australia relationship serves the fundamental interests of both peoples. We hope the Australian side will learn from recent setbacks in our relations and meet China halfway rather than take one step forward and two steps backward.”

But Ms. Abbas says statements like this aren’t sufficient, imploring Canberra to withhold trade with the Chinese Government until it addresses its human rights atrocities.

“The Uighur atrocity should be included in every trade negotiation and every foreign policy decision that Australia has with China,” she said.

“The Chinese Government is not only exterminating the Uighur people and their culture. This is their vision for the world. China is a huge threat to Australia’s national security.

“Pretty soon this is going to become the new normal. People get used to it, like cooking a frog in warm water.

“They’ll say, ‘Oh yeah, it happened in Xinjiang. Then it happened across China. Now it’s happening here in Australia’.”