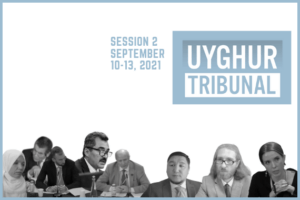 In London, from September 10-13, the Uyghur Tribunal held its second and final session. The Committee, chaired by Sir Geoffrey Nice, heard further evidence on the atrocities and genocide being perpetrated by the Chinese regime in East Turkistan. This people’s tribunal is an attempt to hold accountable a regime that evades accountability by leveraging economic and political power to obfuscate its genocidal policies. In response to a lack of transparency, the refusal to admit investigators, and the stonewalling of international pressure, this tribunal has brought the question of genocide to the people, who cannot be bought. In total, this tribunal heard from over 70 witnesses, and over 30 researchers spent a combined 10,000 hours reviewing an insurmountable amount of evidence, including 500 fact witness statements.

Campaign For Uyghurs (CFU) applauds those testifying as brave and proud champions of the Uyghur cause; this truly is a proud moment for human rights around the world. Those who offered first-hand accounts described a horrifying reality. The stories and evidence presented in this tribunal are too great to ignore: the Uyghurs are facing a genocide. The Genocide Report published by CFU in July of 2020 came to this determination utilizing the standards of the Geneva convention, and we look forward to the world coming to this determination now.

CFU was especially proud to note one of the staff’s testimony on Uyghur educational policies. The testimony states that “There are a lot of things we can go into, in the topic of education, and there is a lot that cannot be quantified. The mental harm that is being done to minor children, as a result of these policies to forcibly “assimilate” them into the Han Chinese identity, and as a result of this impossible choice to try and escape is really quite horrifying.”

Abdulhakim Idris, of the Center for Uyghur Studies, also provided expert testimony on the use of economic power to prevent action on the genocide, and the colonial history of East Turkistan. He said “The Uyghur people know, from their experience, how to warn other countries of the coming danger from China. To conquer central Asia, they have to destroy the Uyghur people[…]in almost 136 years of colonization by China, Uyghurs have lived many tragic days. China knows what they did to the Uyghur people, and so they are afraid of them, as a people.”

Executive Director of CFU Rushan Abbas said “Having watched this tribunal in full, I have been horrified by what I have heard, especially knowing that my innocent sister may also be subject to the same tortures being described. To watch these brave witnesses testify on behalf of the voiceless people back home made me so proud of them. Our pride is our greatest asset, and we are fighting back against this genocide as one unified people not only to save the Uyghurs but also to save the future of this free world. I applaud the tribunal for its work, and await its decision.”

As the Tribunal closes its investigation and delivers its upcoming verdict, there will be another opportunity for the world to act. If, after examining the testimony and evidence, the Tribunal determines the actions taken by the Chinese regime in East Turkistan to be genocide, then there will be a legitimate label under which governments and international organizations can unite without fear of accusations of bias. This is a turning point in the global response not only to this genocide, but to all violations of human rights.

To view the statements from tribunal witnesses, click here. You can watch both the tribunal hearings here.