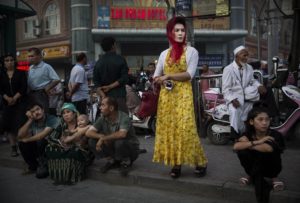 “Uyghur workers are ready to serve as slaves; the minimum order is 100 workers!”

(Prepared for CFU Exclusively)  Today, if you ask someone wearing ‘Nike” and ‘Puma’ shoes on his feet, an ‘Adidas’ shirt on his back or carrying, ‘Fila’ bag on his back and talking on an ‘iPhone,’ whether slave markets still exist in the world, the answer will be, “Oh, come on! Of course not. There is no slavery!”

Because, it is not possible for someone to imagine that Uyghur youth is placed in concentration camps and then put up for sale on an “online slave market,” which is available for use worldwide and utilized by the world’s largest companies.

“Our company provides state-guaranteed shipment services of many workers”

“State-supported, working units, quality, safety, and reliability. Companies have a choice of men and women, who are also categorized by age”

This type of modern-day slavery announcement was advertised by a Chinese company named Qingdao Decai Decoration.

China’s rapidly evolving modern-day slavery was uncovered by the Australian Strategic Policy Institute (ASPI). All this is taking place simultaneously with the Chinese virus which puts millions at risk or illness and even death. According to the report, between 2017 and 2019, over 80 000 Uyghurs are taken from concentration camps in East Turkistan and placed in forced labor facilities in China proper. Unfortunately, following the release of the report to the public, the details were not discussed as everyone quickly became solely focused on China’s coronavirus.

The ASPI report revealed that China uses Uyghurs as a commodity. China is enslaving the world with financial debts. China started to build the modern-day concentration camps back in 2014. In an effort to eliminate and assimilate the Uyghur people. The Chinese government defended the camps by calling them “vocational training facilities.” The communist regime began sending people out of the camps into forced labor facilities in China proper. For this. The local administrations and companies operating in human resources began advertising Uyghurs as slaves in online markets.

“1000 ethnic minorities are waiting to be reserved”

The report gives crucial examples of China’s modern slave markets. The details of an advertisement are as follows:

“Our company is ready to send a large number of workers from the Xinjiang region under state supervision.

Government-led working units, quality, safety, and reliability. The male and female ratio and age characteristics are different.” The advertisement included a cartoon of an Uyghur man and woman.

The title of another ad is as follows: “1000 ethnic minorities are waiting for the online reservation.” The details of the announcement are shocking: “The Xinjiang administration organized 1000 trained individuals from Xinjiang who passed political and health screening. Their ages are between 16-18 and recorded by the Xinjiang administration. Factories can apply to the Xinjiang police stations. It starts with a one-year contract. In order to manage it easily, a chef from Xinjiang can also be supplied. Workers will be sent to at the factories within 15 days after signing. Those who need the workers can apply immediately. Advantages of the employees from Xinjiang; It is suitable for a semi-military management system, can handle hard work, there are not going to be personnel expenses, and the workers are provided until the end of the contract. Minimum order is at least 100 workers”

Companies accepting Uyghur employment as well as those providing Uyghur labor are getting money.

The ASPI report also states that the online labor markets which sell Uyghurs as a commodity provide significant gains to local governments and intermediary companies. The deal is as follows; Organizers which send Uyghurs out of remote regions of XUAR to less remote areas: 20 Yuan ($3) per person. And Uyghurs sent out of East Turkistan to China proper, 300 yuan ($43.25) per person. The factories that accept the workers are supported by incentive packages provided by the communist regime who is controlling East Turkistan. If a one-year agreement is made, companies are getting paid 1000 yuan (approximately $144.16), and 5000 Yuan (approximately $720.80) for three years. The subject of the article is the world’s leading companies where they relate to the oppression and persecution of Uyghurs and their explanations about the report. Last but not least, if China is not stopped today, this will be a concern for other societies too.

Who benefits from my sister’s forced labor?

In reference to the ASPI report that confirms that people from East Turkistan are forced to work in Chinese labor facilities, Rushan Abbas asks, “who benefits from my sister’s forced labor?” GAP, L.L. Bean, Calvin Klein, or H&M; Is my sister forced to work in one of your factories?” According to the ASPI’s ‘Uyghurs for Sale’ report, 83 brands, ranging from Apple to Dell, from Mercedes-Benz to Nike and Adidas have Uyghur slave labor in their supply chains. These are Uyghurs who were deported to China’s concentration camps and also sent to forced labor facilities. One of the places examined in the ASPI report is a case study in the Qingdao Teakwang Shoe Manufacturing Company. This company is based in South Korea and produces 7 million pairs of shoes annually for Nike; one of the largest companies in the world. Since 2007, 9800 Muslims Uyghurs were sent to forced labor facilities. However, in January of this year alone, 600 people from East Turkestan were sent to these forced labor facilities.

The majority of the employees in these factories are women from the Hoten and Kashgar regions. These people, who are employed by China as modern-day slaves produce shoes at the factories during the day and are then forced into “training programs” in the evening. The programs begin with singing the Chinese anthem and giving “citizenship education.” In one sense, implementing a system similar to the camps established in East Turkistan. In a statement regarding the report, the Nike administration stated that its “suppliers are relied upon to meet the international labor standards at a global level” and it is prohibited to use slave workers.

Another reviewed report is the Haoyuanpeng Clothing Manufacturing factory in the Anhui region, known for short HYP. The ASPI report stated that when you include the 63 people sent in 2018 from East Turkistan into this factory, this adds up to 500 Muslim minority members in the factory overall. The brands’ HYP makes products like Nike, Fila, Adidas, and Puma. However, the Adidas brand has announced that it will investigate these claims.

Those sent there are from the so-called “training camps” which operate in the “Jiashi” region are Uyghurs from Paywazat, Kashgar. The Chinese government not only transferred people out of this camp into factories but has also built factories and warehouses in the center of the Jiashi camp.

Today, China is using the virus to its advantage. China should be held accountable for forcing Uyghurs and other Turkic Muslims to work in forced labor facilities. These companies which are found to be complicit in these human rights violations should take control of the situation.
Other countries must also pressure China to stop this persecution. Otherwise, as the founder and Executive Director of Campaign for Uyghurs Rushan Abbas said at the Congressional-Executive Commission on China, “History will definitely remember those who did not oppose this situation and those who remained silent on the genocide.”