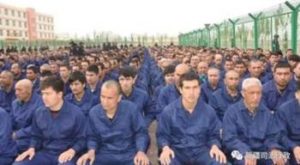 When a million Uighurs and other Muslims have been locked up in Xinjiang’s detention camps, and as documentation of forced labour mounts, it might seem perverse to pay attention to fashion shows, beauty salons and a park. Yet these developments are not trivial. They form part of China’s efforts to erase Uighur culture. Recent research details official efforts to change Uighur women’s style, which began with 2011’s “Project Beauty” initiative, encouraging them to shun the niqab and jilbab, and has recently has seen the establishment of hair salons and beauty parlours. These, explained an official, would transform women’s body image, then their way of life, and finally their way of thinking.

Meanwhile, satellite photos have revealed that dozens of cemeteries in the north-western region have been destroyed in the last two years. In Aksu, at the graveyard where a prominent Uighur poet was buried, tombs were moved and the land turned into Happiness Park, with panda models and a children’s ride. Similar evidence has already shown the demolition of Islamic religious sites. Like the attempts to coerce Uighurs into celebrating Chinese new year and to discourage the use of the Uighur language, these developments represent the hollowing out of a culture.

READ THE FULL ARTICLE AT THE GUARDIAN