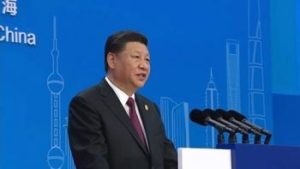 Beijing was never going to welcome the news that the US had passed a law backing pro-democracy protesters in Hong Kong. But its anger today at Donald Trump’s signing of a bill it condemns as “full of prejudice and arrogance” perhaps had extra bite. This was its third blow in a week. On Monday, leaders woke up to a pro-democracy landslide in Hong Kong’s local elections, and the publication of leaked documents exposing the workings of internment camps in Xinjiang, where at least a million Uighurs and other Muslims are believed to be detained.

China’s bullishness has already been challenged by the trade war and slowing economic growth, now at a 27-year low. Mr Trump has previously made it clear that he regards Hong Kong’s protesters as leverage, and has shown he does not want this law to hinder a trade deal that both sides need and appear to be close to agreeing. China is hoping he will not implement the law, which enables sanctions on individuals and the revocation of the region’s special trade status if annual reviews find that it has not retained sufficient autonomy.

READ THE ARTICLE AT  THE GUARDIAN