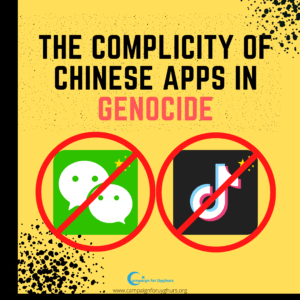 Campaign for Uyghurs supports the executive order banning TikTok and WeChat. TikTok, owned by a Chinese company, ByteDance, has been found to be a potential spying threat and the app’s ability to safeguard user privacy has repeatedly been called into question. The Chinese government also uses WeChat to collect data and spy on its users. By allowing citizens to utilize Chinese-made apps, the CCP is being given free reign to infiltrate democratic states and spread their false narratives like a virus.

Content that Beijing deems “subversive” has also been forced to be removed from both platforms. Human rights experts are well aware of the ways that these apps have been utilized to spy on Uyghurs and other dissenting voices and are used to persecute these individuals and their family members. Information collected from WeChat can be enough to land one in a concentration camp or prison, as is the case for many Uyghurs who have contact with foreigners or family members who are abroad. Tencent, WeChat’s parent company, is thus clearly complicit in the genocide of Uyghurs, amongst other affronts on human rights. The United States administration has not been alone in acknowledging this, India has also banned far more Chinese apps than were addressed by the U.S. executive order on August sixth.

Campaign for Uyghurs executive director, Rushan Abbas stated, “The international community must band together to protect their ideals and democratic values. China represents the antithesis of these ideals and values and by allowing these apps to be used, the Chinese regime is being invited to spread its autocratic policies. They have always had the option to open up to the world and stop blocking foreign apps and websites, and they have always refused to do so. Rather, they use the data collected by their apps to interfere with other countries’ internal policies and affairs.” Ms. Abbas continues, “Additionally, there can be no trust when the authorities commit genocide. No conveniences provided by these apps can be worth the cost in human lives.”

Campaign For Uyghurs calls on other countries and international entities to take actions against the Chinese regime and ban the use of Chinese-made apps, both for the sake of avoiding complicity in genocide, as well as to ensure the safety of your citizens and sovereignty of  nations. China is not only a threat to Uyghurs, it is a threat to the world and must be addressed accordingly.