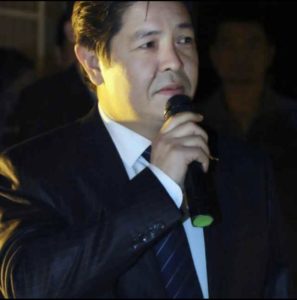 Campaign for Uyghurs is horrified to learn of yet another Uyghur victim of the Chinese regime’s persistent actions to imprison prominent Uyghurs on false charges. Hursan Hassan turned 50 this year and has had an accomplished career, having studied linguistics, done voice acting, and been a director of short films and owner of his own production company. He had even attended a course organized by the China Film Association and China Federation of Literary and Art Circles in October of 2018. In spite of all this, he was detained in December of 2018. Known for his great talent and wonderful sense of humor, his family was horrified to learn that just a few days after his wrongful arrest, he was treated at the emergency room despite being very healthy before his detention.

On September 4th, 2020, more than 20 months after being detained, he was sentenced to 15 years in prison for separatism, a charge that is falsely levelled against Uyghurs in the same way that corruption charges are leveled at Han Chinese officials who express any dissent with Xi Jinping’s administration. This case stands as yet another example of the atrocious lie that is perpetuated by the Chinese Communist Party that they are running vocational training centers. Mr. Hassan, a well-educated, well-regarded, intelligent individual with no need of job training, is an example of how Uyghurs are being regularly imprisoned by the regime in this manner.

The international community heard from Chairman Xi at the United Nations General Assembly on September 22nd. In his speech, he stated that the international community should “rise above ideological disputes”. This is not an “ideological dispute” that we should rise above, as Xi seemed to imply, rather, every single conversation should revolve around it. His statement that “we should respect a country’s independent choice of development path and model. The world is diverse in nature, and we should turn this diversity into a constant source of inspiration driving human advancement. This will ensure that human civilizations remain colorful and diversified.” We are left to ask the very rhetorical question: how does one define civilization? If the way his authoritarian regime defines civilization is as China is at present, the world should seek no part of it. The Chinese Communist Party has turned China into the least civilized place in the world.

The mass detainment of Uyghurs and the sentencing of people like Hursan Hassan should never occur in a “civilized” nation. Campaign for Uyghurs joins with the family of Hursan Hassan in calling for his immediate, unconditional release. If China can be allowed a place at the table with the rest of the nations, its leaders must act in accordance with civility. The actions of the regime at present are barbaric, evil, and cannot be tolerated by the nations of the world any longer.