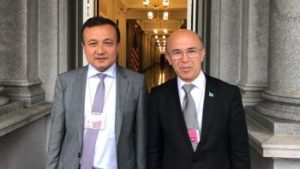 Dolkun Isa, the president of the World Uyghur Congress (WUC) exile group, is used to being on the receiving end of hostile Chinese propaganda campaigns, but the latest state media slander story carried sad news: His father had passed away.

The news came in a Jan. 10 report by the Global Times, a nationalistic tabloid, slamming the WUC and Isa personally in what the Munich-based group said showed China’s growing frustration with his success in raising the profile of the issue of mass internment in the Xinjiang Uyghur Autonomous Region (XUAR).

Authorities in the XUAR have detained as many as 1.8 million Uyghurs accused of harboring “extremist” thoughts in internment camps since April 2017. Isa and the WUC have drawn world attention to the plight of the Uyghurs, making him and his family a target for state media in China.

Isa had also learned indirectly of the circumstances behind the death of his mother, Ayhan Memet, on May 17, 2018, through a subsequent investigation by RFA’s Uyghur Service. RFA determined that she died at a detention center in her home prefecture of Aksu (in Chinese, Akesu) where she was detained for exhibiting “religious extremism.”

“The last time I spoke with my mother in April 2017, my mother was well and didn’t have any major medical issues.  A year later, I learned of her death. I learned about her death in a camp after RFA confirmed it,” Isa told RFA this week.

“Then, it became clear from media reports that my father was sent to a concentration camp in May or June 2017, and died a year later,” he said.

“I am trying to find out what exactly happened but haven’t been able to know the facts,” said Isa.

The Global Times Jan. 10 article, “Relatives of Xinjiang separatists condemn their lies,” took aim at Isa and his predecessor at the WUC, Rebiya Kadeer, with purported comments from relatives denouncing the exiled activists.

The report referred to a video the newspaper said was released at an event in the XUAR capital Urumqi on the same day.

“It is really heartless of my younger brother Dolkun Isa to use my deceased parents to smear Xinjiang from overseas. We are very upset about it,” the video purportedly quoted Azgul Isa, Isa’s elder sister, as saying.

“Dolkun Isa has for many years spread lies about Xinjiang,” the Global Times said.

“Recently, he claimed Xinjiang detained a large number of Muslim Uyghurs and the local government has been destroying Uyghur culture and suppressed Islam. He even claimed his mother died during her captive (sic) in the ‘re-education camp,’” said the newspaper, published by the Communist Party’s mouthpiece, The People’s Daily.

“What surprised me most is that Global Times published my sister’s purported accusation in a video but her video is nowhere to be seen,” Isa said.

“In fact, I am truly worried about my sister, brother and other relatives. Whether they are alive or dead is a question now,” he said, adding that he has lost contact with all of his siblings for almost three years and fears they may be in the camp system.

In a statement on Isa’s father, the WUC said “To see his family used against him in this way and to learn about the possible death of his father in a Chinese propaganda article is incredibly painful.”

The WUC said that beyond state media attacks on Isa and his organization, China’s campaign to smear Uyghur activists has “escalated into veiled threats and potentially more serious efforts to intimidate and threaten WUC staff.”

Kadeer, whose son and two granddaughters were quoted as denouncing her in the Global Times video, asked the “Chinese propaganda machine” to confirm the whereabouts of 32 members of her extended family who are missing, and called the report an “insult to common sense and the conscience of the international community.”

“To force children against their parents, forcing siblings to denounce each other, is an old tactic that CCP has used during the Cultural Revolution,” she said in a statement.

“The Chinese Communist Party has been recently using this old tactic more frequently after the strong criticism and pressure from the international community,” Kadeer added.

The WUC statement cited a Jan. 12 incident at a funeral in Munich in which Isa was harassed and threatened with assault by family members of Shohret Zakir, the chairman of the XUAR.

“Mr. Isa was approached by the two individuals who demanded that Mr. Isa stop criticizing Mr. Zakir for helping to cover up and facilitate the crimes against humanity being perpetrated against Uyghurs in East Turkistan by the CCP,” it said, using Uyghurs preferred name for the territory.

“The individuals told Mr. Isa that if he did not stop speaking about Mr. Zakir, Mr. Isa’s family members in East Turkistan would be at risk,” it said.

“As these individuals became increasing hostile, they attempted to physically assault Mr. Isa, which was only prevented due to the intervention of other attendees at the memorial service,” added the WUC.

Isa, who has lived in exile since 1994, noted that he has long faced harassment and treats from China for his work, from efforts to get INTERPOL to arrest him to obstruction of his activities at the United Nations.

“I was shocked by this incident, as I don’t expect to be threatened in a democratic country. Although we are uncertain of the motivations of the individuals, we can’t totally exclude that it may be part of China’s strategy to silence human rights activists abroad,” he said.

“It is incredible that German citizens feel comfortable threatening a fellow citizen by openly stating that the Chinese government might carry out reprisals against his family,” said Omer Kanat, executive director Uyghur Human Rights Project.

“Perversely, these individuals had themselves been granted political asylum and are able to enjoy the rights of living in a democratic country.”

Asked by RFA about his father, Isa said “as a son and a human, I need to know whether my father is alive or not. This is what disheartens me. If he has indeed passed away, I need to hold a funeral ceremony for his honor.”

“I do not know if my father has passed away of old age or in a concentration camp,” said Isa.