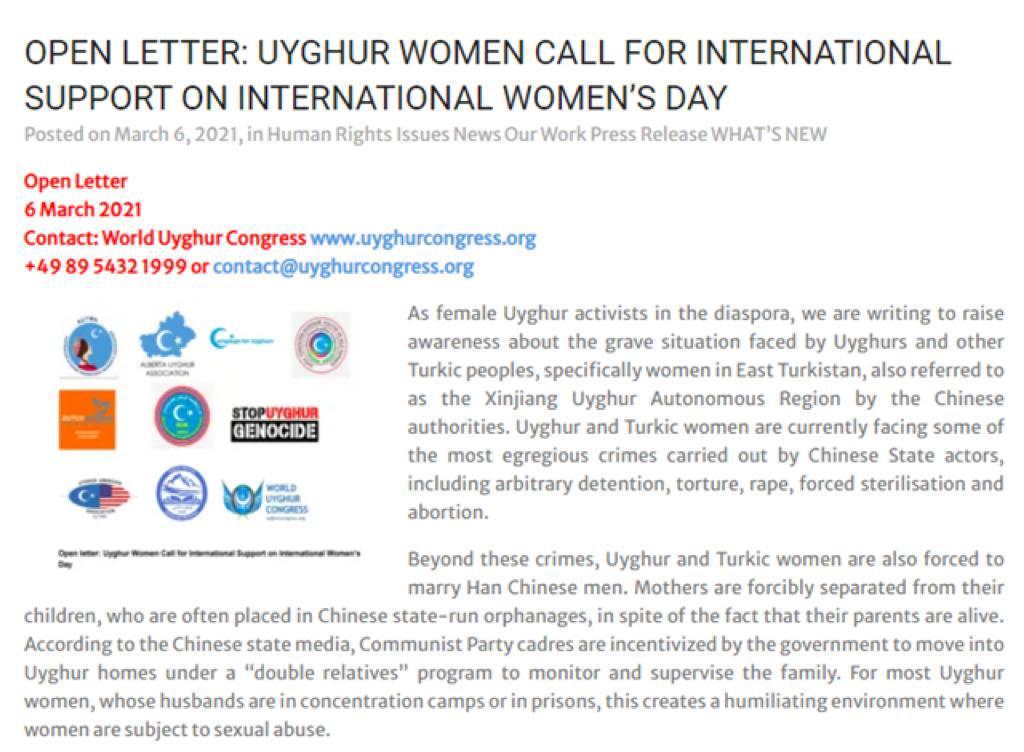 Campaign For Uyghurs (CFU) was pleased to join the World Uyghur Congress, women advocates from the Uyghur organizations, and brave female camp survivors in an open letter in honor of International Women’s Day.

The letter called on international women’s organizations and feminist allies to “speak up against the CCP’s repression of women and to stand in solidarity with Uyghur women.”

Campaign For Uyghurs Executive Director Rushan Abbas wrote a piece for BitterWinter magazine last year entitled “Uyghur Women Persecuted: Will the Feminists Support Them?”. In the article, she wrote: “Uyghur women, who have chosen to speak up for their loved ones and their people, and these efforts have been punished and largely ignored. Where are the Muslim sisters and brothers? Where are the Hollywood icons who proclaim themselves to be advocates for human rights? Where are the feminists? This war on the Uyghurs is brutally carried out as a war on women also.”

As brave women have shared their stories of horrifying physical, mental, and sexual abuse, the world must stand with them. Feminism demands that these women be honored and protected. This is especially important as the Chinese Foreign Ministry is engaging in attacks on female victims who have testified to the CCP’s crimes.  The Chinese regime’s pathetic slut-shaming and defamation of their character are reprehensible. This type of targeting of victims demands a response from the international organization, and especially from feminists.

These despicable CCP mouthpieces who engage in such activities even as they carry out genocide of the Uyghur people should be given the cold shoulder by the international community and forced to give an account for their brutalization of innocent Uyghurs. They should not be offered a seat at the table or granted respect while functioning as inhumane, unreliable international criminals.

This International Women’s Day, Campaign For Uyghurs stands with victims of the CCP’s systematic sexual abuse and genocide.