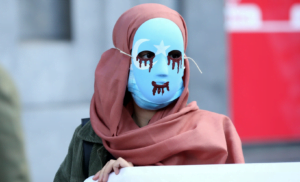 Demonstrators gather in front of Gare Centrale to protest human rights violations of China against Uyghur Turks, in Brussels, Belgium on July 26, 2020. (Photo by Dursun Aydemir/Anadolu Agency via Getty Images)

Calling out Beijing isn’t enough. The U.S needs to exact an economic cost for these brutal human rights violations.

A 13-ton shipment of hair weaves and other products was seized earlier this month by federal agents over allegations that the individuals making them were suffering human rights abuses. Authorities believe the products consist of human hair taken from detainees held in China’s now-infamous internment camps in Xinjiang. This is just the latest evidence that points to a growing forced labor problem in China—a trend that should concern American businesses, consumers, and politicians alike.

As a major trading partner of China, the United States is positioned to push Beijing to abandon its forced labor practices. A group of congressmen has put forth the Uyghur Forced Labor Prevention Act to do exactly that, and Congress should seek to pass this measure as soon as possible.

Beijing’s abuses against the Uyghur Muslim minority have attracted international media attention since reports surfaced in 2017 that an estimated one to three million Uyghurs and other Muslims in Xinjiang are detained in internment camps. Survivors describe brainwashing, torture, and unhygienic living conditions. The American government recognizes that the camps are more than just party propaganda centers. They are a source of forced labor.

The State Department’s latest human trafficking report released in June hands a stinging reprimand to China. It cites “widespread forced labor, including through the continued mass arbitrary detention of more than one million Uyghurs, ethnic Kazakhs, ethnic Kyrgyz, and other Muslims in the Xinjiang Uyghur Autonomous Region.” After Chinese authorities detain these individuals without evidence of any crime, they are sent to work in factories.

A recent report by the Australian Strategic Policy Institute (ASPI) estimates that over 80,000 Uyghurs from Xinjiang were transferred to work in factories throughout China between 2017 and 2019—some of them dispatched straight from the camps. Suppliers for major companies like Nike and Apple have been linked to forced labor involving Uyghurs. Beijing’s scheme is a shameless move to profit financially from its internment camp system, a gross human rights violation in its own right.

Addressing forced labor in China is a challenge for U.S. leaders hoping to maintain trade relations. But congressional efforts like the Uyghur Forced Labor Prevention Act, spearheaded by Senator Marco Rubio and Representative Jim McGovern, offer a targeted approach to addressing these troubling reports from Xinjiang.

Past experience has shown that diplomatic appeals will not sway Beijing. The U.S. must put an economic cost on China’s use of forced labor from Uyghurs who are detained for their faith. When Beijing no longer profits from its abuses, only then can we take a practical step towards improving human rights conditions in China’s most oppressed region.

The U.S. has no reason to incentivize human rights violations. China’s forced labor program is an affront to American values and undermines the State Department’s consistent promotion of religious freedom abroad. The situation faced by Uyghurs in China is the world’s foremost religious freedom crisis, and the Trump administration’s commitment to promoting international religious freedom should stir them to urge Congress to pass this bill.

Congress made a lot of progress by passing the Uyghur Human Rights Policy Act in May, allowing individuals to be sanctioned for their facilitation of the arbitrary mass detention of Muslims. The signing of this bill sent reverberations around the world because it was the first time a government had taken concrete measures to address the Uyghur crisis.

But the atrocities haven’t stopped. More gory details of China’s abuses continue to emerge. Now is the time to make another bold stand. Congress should seek to pass the Uyghur Forced Labor Prevention Act immediately. Momentum is on our side, and every minute we wait is another minute that Uyghurs languish in camps.