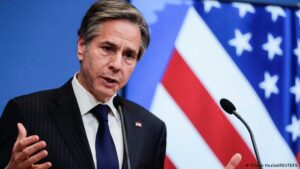 Campaign For Uyghurs (CFU) was gratified to see the Chinese Communist Party’s genocide and crimes against humanity spotlighted in the newly released State Department report on Human Rights Practices for 2020.

In remarks delivered March 30th regarding the report’s release, Secretary Antony Blinken expressed his thanks for “human rights defenders and journalists” as well as the dedicated personnel who compiled the report.

Regarding alarming trend lines indicating a decline in human rights globally, Secretary Blinken stated that “We see it in the genocide that is being committed against the predominantly Muslim Uyghurs”.  He continued that “Standing up for human rights everywhere is in America’s interest.” Secretary Blinken confirmed, stating that others who indicated the U.S. should focus only on domestic issues “missed the point”.

Speaking on the United States’ own flaws, Secretary Blinken stated that “We deal with them in the daylight, with full transparency. In fact, that’s what separates our democracy from autocracies..”. He listed the recent collaborative sanctions against Chinese State officials and entities as an example of holding perpetrators of human rights abuses accountable.

Dr. Rishat Abbas, Senior Advisor for CFU and Honorary Chairman of Uyghur Academy stated in response to the remarks that “Uyghurs are greatly encouraged to see this clear messaging to call out the Chinese regime’s crimes for what they are, and to stand firmly on the principles that should be upheld by the United States in particular regarding freedom and respect for the values of humanity.”

CFU continues to remain supportive of the actions by the government of the United States to work with other democracies and concerned leaders to bring justice and hopes to see the continuing prioritization of stopping the Uyghur genocide using all tools available.