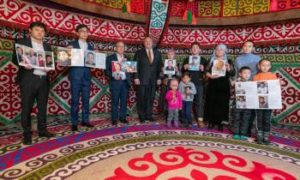 Secretary of State Michael R. Pompeo met on Sunday with ethnic Kazakhs whose family members have been detained in internment camps or prisons in the Xinjiang Uighur Autonomous Region, People’s Republic of China (PRC). These individuals’ family members are among the more than one million ethnic Kazakhs, Uighurs, and members of other Muslim minority groups whom the PRC government has detained in internment camps since April 2017.

The Secretary said, “the United States will do everything it can to resolve your situation and the broader problem of Chinese repression in Xinjiang.” The Secretary thanked the meeting participants for their bravery in sharing their stories despite the risks to themselves and their families.

These family members give voice to the million or more victims in Xinjiang who are in prison, otherwise detained, or unable to speak for themselves.  They speak for those who cannot move freely or undertake even the most basic practices of their religion. The Department of State’s 2018 Human Rights Report on China detailed abuses in Xinjiang, including torture, repressive surveillance measures, forcible “home stays” of PRC officials monitoring Muslim homes, and instances of sexual abuse and death.

We call on the Chinese government to immediately release these individuals’ family members and all others arbitrarily detained, and to end its program of systematic surveillance and repression.