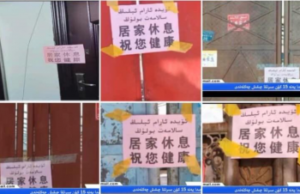 Recently a young Han man from Xinjiang who I will call Wu Yi told me a joke his friends in Ürümchi have been repeating since the end of January:

“When will people in Xinjiang be allowed to go outside? When the last patient in Wuhan is cured.”

Wu Yi and his friends have been grumbling about the way they’re losing money. The addition of checkpoints in 2017 already made it difficult to do business: Wu Yi, who grew up in an affluent family in the city, said his father had to meet business partners from Kazakhstan in places like Shanghai or Beijing. Now even that was impossible.

Since January 27, five days before Huanggang, Hubei Province was locked down, Wu Yi’s family has been permitted to leave their apartments only twice per week. Everything is controlled by the auxiliary police (协警 xiéjǐng) and the neighborhood watch office. “Since there was already such a huge police force in Xinjiang for the ‘terrorism’ problem, it was easy for them to lock all of us up,” he said.

READ THE FULL ARTICLE AT SUPCHINA