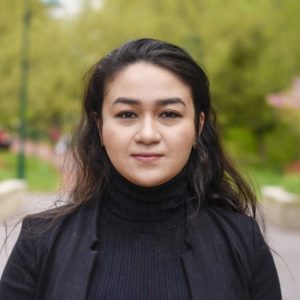 In this SAR Spotlight, we feature Jewher Ilham, the daughter of imprisoned Uyghur scholar Ilham Tohti. Professor Tohti is a world-renowned intellectual whose articles on the website Uighurbiz.net sought to promote reconciliation and dialogue between Han Chinese and Uyghurs in China. In 2014, he was sentenced to life imprisonment in connection to his teaching activities and writings. Ilham, who moved to the United States in 2013 to begin her undergraduate studies at Indiana University, has been working tirelessly for her father’s release ever since. She has accepted awards on his behalf and has met with numerous government officials, including U.S. President Donald Trump, and recently spoke at the United Nations General Assembly to discuss his case and Uyghur rights.

To amplify Ilham’s voice, story, and work to fight for her father’s freedom, we share her remarks from SAR’s 2019 Student Advocacy Days held at the New York University Center in Washington, D.C.

Ilham originally planned to come to the United States in February 2013 with her father, who had been invited to start a yearlong residency at Indiana University. As they arrived at the Beijing airport and handed over their passports, authorities detained Professor Tohti, and prevented him from leaving the country. Ilham, at just eighteen years old and with little knowledge of English, had to travel to Indiana alone knowing that she would not be able to safely return to China.

On January 15, 2014, police raided Professor Tohti’s home, arrested him, and held him incommunicado for five months. Professor Tohti was sentenced to life in prison on September 23, 2014, on a charge of separatism that stemmed from his teachings at Central Minzu University and writings published on his website, “Uighurbiz.net.” His sentencing was upheld on appeal.

“My father was arrested by the Chinese government for several reasons… He was charged with separatism and as a person advocating for violence, which is absolutely untrue. I assume that he was arrested … because my father is one of the few well-known Uyghur scholars who was living in Beijing… He spoke English, Chinese, Uyghur, all very fluently … so he had no barrier communicating with the outside world.”

Ilham discussed the need for widespread calls to action in addressing her father’s wrongful sentencing:

“For the past few years, I have tried almost every single thing I thought could possibly change the situation… I’ve almost tried every way… I don’t think there is one specific strategy that is most useful. The Chinese government is so unpredictable, you don’t know what will work… The only thing I can do is try every way – not just speaking to the US government, but also the whole world. With one country towards another country they might not listen, but [what] if the entire world is questioning [the Chinese government]?”

When asked to describe her father, Ilham shared:

“Some people call my dad a hero, some people call him a political activist, some call him a scholar… even a journalist. I hear lots of words. These might sound very correct to you all, but to me, he’s just my father. A simple man who tried to help people like his daughter, who are Uyghurs. They have their own family. They are innocent people who just deserve a very good life… The name that I really don’t like is “political activist.” I don’t consider my father a political activist… In my opinion, my dad was simply trying to help, sharing his research, sharing what he was working on, and what he knew about Uyghurs and Han Chinese. I don’t think what he was doing was activism. He’s just a simple man, a scholar, an intellectual, a father, a good man. A good man would be the best definition, I think.”

Sign a letter of appeal today to join SAR in calling for the immediate release of Professor Ilham Tohti!

SAR invites you to the SAR Network 2020 Global Congress on March 25-28, 2020, to learn more about how you and your campus can support wrongfully imprisoned scholars. Registration is now open!