Rushan Abbas from Campaign For Uyghurs (CFU) Testifies before the U.S. House of Representatives Committee on Foreign Affairs 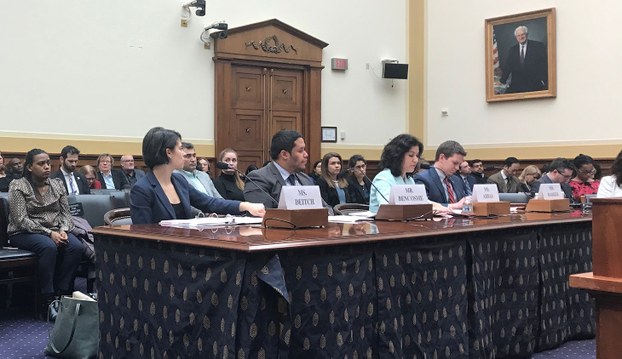 Since April of 2017, an estimated 3 million Uyghurs and other Turkic Muslims have been arbitrarily detained in China’s concentration camps. The Uyghurs and other Turkic Muslims are facing genocide by the Chinese communist government, due to their religious beliefs and cultural differences.  Ms. Abbas, an American citizen has been using her voice and platform to raise awareness and most importantly prompt tangible change. As a result of her activism, her sister Dr Gulshan Abbas became a victim of the concentration camps. An effort by Beijing to silence those abroad as it silences those in China.

Rushan Abbas continued to be very vocal, and she stood before the U.S. House of Representatives last week stating that “the world has failed to act even now, when there are over three million [people] in the camps. By waiting so long to act, China’s actions in my homeland now include every single act listed in the 1948 Genocide Convention, each of which the world, including China, is obligated to prevent.” The Uyghur women in East Turkistan are suffering the consequences of the world turning a blind eye to Chinese government’s genocidal policies.  There are media reports of Han Chinese officials deployed to Uyghur homes to live and lay in beds with Uyghur women while their men are taken. As a result, Uyghur women are facing sexual abuses, which Rushan Abbas calls government sponsored “mass rape.”

Ms Abbas is hoping for legislation to be passed where East Turkistan would be recognized as a region where forced labour is exercised and to have sanctions against companies which are benefiting from this labour. In doing so, the current economic incentives which encourage the companies to utilize the cheap resources made on the backs of enslaved Uyghurs would be eliminated.

Rushan Abbas ended her testimony by posing a chilling, yet urgent question, “will we be able to uphold the vow ‘Never Again,’ with real actions or shall we sadly witness a repeat of the 1938 Munich Pact, as countries around the world avoided acknowledging Nazi Germany’s human rights abuses for the sake of economic trade, at the cost of millions of lives?”

Campaign for Uyghurs (CFU) works to promote and advocate for the human rights and democratic freedoms for the Uyghurs and other Turkic people in East Turkistan (referred to in China as “Xinjiang Uyghur Autonomous Region”). It mobilizes individuals and the international community and builds bridges to take action on behalf of and to raise public awareness of the Uyghur issue with a special focus on Uyghur women and youth, and to activate persons and entities to work together to stop the systematic human rights abuses against the people of East Turkistan.

If you wish to stop receiving e-mails from the Campaign For Uyghurs, please Reply with “Unsubscribe” or “Remove Me” in the subject line.