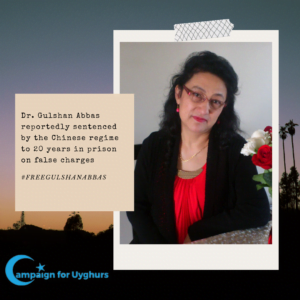 Dr. Gulshan Abbas Reportedly Sentenced to 20 Years in Prison by the Chinese Regime

On December 25th, 2020, the family of Dr. Gulshan Abbas, sister of Campaign For Uyghurs (CFU) Executive Director  Rushan Abbas, received news from a reputable source with inside knowledge that Dr. Abbas had been sentenced to 20 years in prison by the Chinese regime on false charges of terrorist activities.

In a press conference organized by CFU and the Congressional-Executive Commission on China (CECC) given on December 30th, CECC Chairman Jim McGovern stated that “The Chinese government’s action to punish and imprison innocent people in an attempt to silence the freedom expression of their family members are morally reprehensible.” He followed his statement by calling on the Chinese government to “immediately and unconditionally release” Dr. Abbas from detention. As one of his demands for action, he called on the administration to “prioritize the case of Dr. Gulshan Abbas in the discussions with Chinese officials”, as well as reiterating the need to pass the Uyghur Forced Labor Prevention Act as soon as possible.

Representative Tom Suozzi stated that “..the Chinese Communist Party is abusing the Uyghurs mercilessly”, and expressed his deep disgust over the ways in which American companies are complicit in crimes against humanity, as well as confirming that Dr. Abbas is not involved in the activities she is falsely accused of.

“I also want to appeal to the Chinese authorities to release Dr. Abbas on humanitarian grounds.” said Representative Chris Smith, later calling her a “wonderful person” and stating his disgust over corporations like the National Basketball Association (NBA) that display incredibly hypocrisy in their “moral posturing” while downplaying human rights atrocities of this magnitude.

Ambassador Kelley Currie, of the State Department Office of Global Women’s Issues, stated that “this is an issue where we have absolutely no space between congress and the administration” and praised the bipartisan support on the issue. “the executive branch, the congress, both parties are lined up with unanimity supporting this.” and calling the news on Dr. Abbas “absolutely heartbreaking for all of us”.

USCIRF Commissioner Nury Turkel stated that he was “deeply upset” and “angry”, saying that “the case of Gulshan is a personal matter to me”, and sharing his personal memories of Gulshan, saying “with her soft-spoken and mild-manner, kind-hearted personality, she was a friend to me”. He continued to say that “It is mind-boggling that a government that the international community thinks of or perceives as a strong government, goes after a grandmother, a mother, a professional, a retired government worked in the way that they have”. “She is one of the nicest people I have met in my life” and that “simply saying I’m sorry that this happened to your family is not enough”.

Rushan Abbas shared her heartbreak, saying “The thought of my peaceful, kind, and fragile sister spending 20 years in a Chinese dungeon because of my activism and that of my brother Dr. Rishat Abbas, is impossible to bear. We have committed to working to defend the Uyghur people’s rights and advocate for justice, and now our sister is denied justice as a punishment.” She continued with words of strong condemnation for the Chinese regime directly, directing them to free her sister and addressing them by saying that “We will never stop speaking of your crimes, and the terror you have wrought by your blood lust”.

Ziba Murat, daughter of Dr. Gulshan Abbas, said that “Our family is devastated by this news but make no mistake, our heartbreak and fierce determination will drive us onward until we see my mother free with us.”

Campaign For Uyghurs would also like to call our allies to action, taking the suggestion of Commissioner Turkel to “call & write the Chinese ambassador, even if they ignore you. Demand unconditional release.”

Contact Information for the Chinese Embassy in the United States:

To view a video of the press conference, please click here.