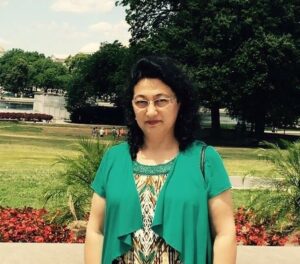 The Chinese Communist regime is committing genocide, as my own family would attest. My wife, Rushan Abbas, has been diligently advocating for Uighur people. In response, the CCP has sentenced her sister, Dr. Gulshan Abbas, to 20 years in prison on false charges.

If Uighur women are forcibly sterilized to reduce the population; if millions of people are being sent to concentration camps; if oppressors come to people’s homes to live with them and share the bed of vulnerable women; if unborn babies are killed; if children are sent to government-run orphanages and brainwashed with communist ideologies; if young Uighur girls are forced to marry Han Chinese — it is genocide.

The first concentration camps were built in East Turkistan (Xinjiang) in 2014 and were fully revealed in 2017. The Chinese regime claimed that they are offering vocational training to those in the camps. But if doctors like Gulshan Abbas, professors like Rahile Dawut, cinema directors like Hursan Hassan, writers like Yalkun Rozi, and others are put in these camps, then they are not training camps but rather a holocaust.

If my own parents, my siblings, my nephews and nieces, who have lived simple, ordinary lives are sent to camps alongside all these Uighur intellectuals, then it is clearly genocide. My wife Rushan spoke out about these atrocities to a think tank in Washington in September 2018, outlining the fate of her in-laws. Her sister was detained six days after this speech.

The fundamental rule of international law is that a person is innocent until proven otherwise. A crime must have occurred, and there must be evidence documenting this crime. Bypassing all international conventions and violating even this simplest rule, the Chinese regime has not shown proof of Gulshan Abbas’ offense.

In spite of her family’s desperate search, Dr. Gulshan Abbas‘ whereabouts were unknown until March of 2019. Dr. Abbas was tried in a kangaroo court for “being a member of a terrorist organization” and sentenced to 20 years.

The first false accusation was that she had been a member of a terrorist organization. Gulshan Abbas is a retired medical doctor who has diligently cared for her patients and tirelessly devoted her days and nights to them for many years.

Perhaps in part due to this strenuous work and dedication, she got sick and retired early. If a lady who had retired from her position for health reasons is to be accused of belonging to an organization, it can only be a humanitarian one.

The second accusation was of helping terrorist organizations. We do not know if the Chinese communist regime considers helping poor patients from the countryside come to the hospital, even after her retirement, as aid to such an organization.

What is even more ironic is that after visiting her daughters in America and returning willingly, she was suddenly taken by the regime in Urumqi, where she lived alone.

The third accusation — that Abbas brought people together and disturbed public order — is absolutely preposterous. No matter what crowd allegedly gathered around Gulshan Abbas, are we to believe that the cameras that watch every square meter of Urumqi did not capture these gatherings?

If the Chinese Foreign Ministry can claim that they are representing a country governed by the rule of law, then they should share the evidence for these accusations in the so-called court case.

Speaking at a press conference on Gulshan Abbas’ case, Gulshan’s daughter, Ziba Murat, stated that, “It is unacceptable for the regime, which introduced itself to the international community as a legitimate government, to imprison people who have never been involved in any crime without any reason.”

The words of Rushan Abbas reveal what is at stake: “Currently, the conscience of the world is being tested. It’s not just my sister or my relatives who lose here, but humanity is losing.”

“If you have failed, keep repeating the lies”

Finally, I remind you of what Joseph Goebbels, Hitler’s propaganda minister, said: “Lie while producing propaganda, and there will be believers. If you have failed, keep repeating the lies.” Today, it seems that some Western politicians, academics, the leaders of Islamic countries, and much of the world believes the propaganda produced by this evil regime.

Those who do not believe in this propaganda, including my other human rights organizations shouldering the burden to end the genocide, will not stop. The Chinese regime’s deceit and viciousness will be revealed layer by layer.

When the day comes that all is laid bare, nobody will have the luxury of saying, “We didn’t know,” and those who remain silent in the face of these atrocities will be tried in the court of conscience, earning their place in history as enablers of China’s genocide.