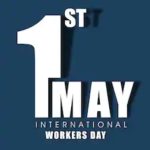 May 1st marks International Workers Day which this year will take place during a pandemic; the global community is impacted by the disaster inflicted on us by the Chinese government. We call on the world to remember that as large portions of the population in China and other countries return to work, the Chinese economy has been pushed back into motion on the backs of Uyghur slaves.

China has carried out a mandatory exodus of Uyghur youth by sending them out from the Concentration Camps in East Turkistan, (referred to as Xinjiang Uyghur Autonomous Region) to work, forced to produce goods for factories. This is done for the benefit of the Communist Party by aiding in hiding the number of victims by spreading them out across China and supporting the Chinese economy by risking Uyghur lives during the Covid19 pandemic. These atrocities have also been confirmed recently by the videos flooding Chinese social media showing Uyghur and Turkic youth at transport hubs around the region with marching orders from the Chinese government.

Simultaneously, the Chinese Communist Party is also ramping up its ongoing campaign to resettle the Uyghur homeland by offering high incentives for Han Chinese who are willing to move into the area. They are given jobs with salaries much higher than any Uyghur could hope to be given and are given land and free housing, most of which have been confiscated from Uyghur families by the Chinese government. In fact, since China annexed East Turkistan in the 1950s, the population of Han Chinese has increased from 5% to 45% -50% at the present stage. Currently, all Uyghurs in the province are required to provide DNA samples, and most disturbingly, this is occurring while officials in Wuhan are able to provide double lung transfers within 24 hours of receiving a request. This employment inequality, combined with the horrifying evidence of active genocide and the inhumane, unethical, nonconsenting organ harvesting practices carried out in China, must be strongly condemned by all nations.

Even in western countries that might publicly uphold their own seemingly upright labor practices, we are reminded of the need for vigilance regarding how businesses and corporations in these nations continue to profit from the human rights abuses in China. Notably, coinciding with International Labor Day, Amazon has decided to ignore the U.S. Government’s trade blacklist and move forward with purchasing ten million dollars’ worth of equipment from Zhejiang Dahua Technologies, the company that is a primary supplier of the surveillance equipment used in the horrifying police state that East Turkistan has become. Their products have been used to uphold the institutions that keep Uyghurs in concentration camps, able to be arbitrarily detained for offenses as small as calling relatives abroad.

The Australian Strategic Policy Institute relayed in its February 2020 report, Uyghurs for Sale, that Uyghurs were forced to work in factories from 2017-2019, and also noted that the estimate of 80, 000 Uyghurs is extremely conservative. In fact, a more recent news report estimates that some 500,000 Uyghurs were transferred while the local government in the region stopped rail transportation for the public in order to make this move. Multiple Western companies, including Nike, Google, Volkswagen, many name brand clothing companies, and other large corporations have been implicated as having benefitted, whether directly or indirectly, from this forced labor. In light of all these atrocities, the global community must take a firm stand.

Rushan Abbas, the Executive Director of CFU, said, “After my sister, Dr. Gulshan Abbas, was abducted by the Chinese government and when I was advocating for her to get her home, I was very surprised to learn how complicit Western companies are in these crimes against humanity,” She continued,  “Now I ask these companies, will you continue to be complicit with China’s genocide? A country where a doctor was turned into a textile worker to produce for your economic benefits?”

Campaign for Uyghurs reiterates its commitment to promote and advocate for the human rights and democratic freedoms of Uyghurs and other Turkic people in East Turkistan and urges governments and businesses to enforce the protection of social, economic, and political rights of workers in the region and across China.

In commitment to the fight for human dignity,