Remembering the innocent Uyghurs who died 30 years ago in the township of Baren, East Turkistan 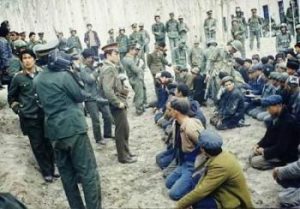 On April 5th, 2020 we commemorate the 30th anniversary of the Zeydin Yusup led a protest in the township of Baren, East Turkistan and the lives lost by the Chinese government’s brutal crackdown. We want to both honor and pay tribute to those martyrs who lost their lives fighting for freedom, justice, and liberty of the Uyghur people’s rights which Turkic Muslims have been deprived of for over 70 years. The Chinese Communist Party (CCP) has distorted the Uyghurs’ fight for freedom into a false “war on terror” to justify its crime against humanity conducting in East Turkistan. What the CCP doing in East Turkistan is state terrorism: ordinary people living in terror because of suppressive policies, not rule of law but ruled by law, and deprived of all basic rights.

The bloody suppression of the Baren uprising on April 5 in 1990 was part of the CCP’s systematic suppression of Uyghurs and their rightful demand. Today the inhuman treatment of CCP on Uyghurs, Kazakhs, and other Turkic Muslims in East Turkistan, once more revealed that there are no such words as democracy or fairness in the CCP’s dictionary.  China’s virus/COVID-19 which turned to a global pandemic today gravely threatens our brothers and sisters in open-prison East Turkistan, not to mention those who live under contagious, unsanitary concentration camps. When the CCP restricted its citizens’ free movement because of the virus outbreak, it has never stopped forcedly taking Uyghur youth to factories in mainland China near the epicenters of the virus, enslaving them. This forced labor has now leaked into supply chains of 83 globally renowned companies that operate and sell goods in democratic countries like the United States. In the meantime, to encourage Han Chinese to move into East Turkistan, the Chinese government has been incentivizing settlers with free housing, free health care and free schooling for their children. All of these approaches of the CCP is aimed at exterminating the Uyghur identity and killing the Uyghur pride.

The Baren uprising signifies the strength and willingness of the Uyghur people to fight against the injustice of the CCP. A resilience that is still visible in Uyghur activists and advocates today. Members of the community who honor those martyrs by displaying the same determination to fight for the oppressed and being the voice for the voiceless. Decades later, continuing to follow in the footsteps of those people who despite the dangers, sought out justice and fought for what is right.

Many Uyghur organizations around the globe were looking to hold demonstrations to pay homage to those who lost their lives to the cause, and Campaign for Uyghurs was no exception. Unfortunately, due to coronavirus, which is now a global threat, the demonstration had to be called off. Nonetheless, we take the time to recognize, remember and honor those who lost their lives fighting against Chinese tyranny, confronting racism and hatred.

In such a sad day like this, we honor those brave souls who sacrificed their lives and the lives of their families for the freedom of Uyghurs. Their spirit is our courage to continue our rightful fight for justice, equality, and freedom of East Turkistan. We are not alone in this fight, and together we will not stop until justice, equality and freedom delivered to the people of East Turkistan.