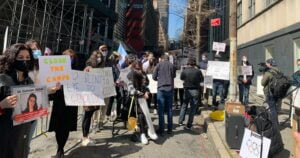 Today we are here to speak to one of the most massive failures of the international community. We have failed to stop the genocide of the Uyghurs. Many people find it hard to believe that history is repeating. We are seeing the largest mass incarceration of an ethnic group in the modern-world today.

The conscience of humanity is at test and we are failing! Once again, slaves are picking cotton! Women are also suffering brutally while the CCP slanders the women who come forward to testify to horrific mental, physical, and sexual abuse. Women face forced abortions, mandatory birth control, and sterilization. They are forced to marry men they don’t love for fear of being called extremists for refusing. Almost a million children are abducted. This is active genocide and the world is muted.

Right now my sister is languishing in a prison as retaliation for our actions here. Because we choose to speak out against genocide, the CCP lies and punishes. They cannot hide from truth and justice. We are here wearing masks, in the middle of facing the struggles brought on by the pandemic, all tied to one root cause. The CCP’s lack of transparency under their totalitarian system brought this epidemic from one city to the world costing millions of lives with their lies!

Where are the voices of true leaders, and especially women’s allies, to denounce the regime for what it is? Where are those who would choose the value of human life over profit? When the perpetrator has money and can buy out the conscience of many, the world is sadly silent. But those evildoers cannot stop us.

For the 3 million Uyghurs suffering in the camps, for the millions in literal slavery, we must continue to stand.

While innocent human beings are forced to make Nike shoes, bottle cokes, and produce PPE what is our response? The realities of it are horrific when even one condition of genocide is occurring. In the case of the Uyghurs all of the conditions in the UN’s Convention on the Prevention of Genocide are being met in the actions of the CCP.

We are standing in the land of the free in front of an institution that should be preventing these atrocities. They are willingly complicit.

As the United States, we have a moral obligation also to do more. We call these horrors by their name. Genocide. What follows? Recognition does not allow us to continue business as usual.

We must take all available action, legally and otherwise, to bring justice. We should sanction all CCP officials. They are carrying out genocide. We must ban all imports from the Uyghur region as a bare minimum.  We should be moving to cut ties with the CCP as a whole. We should have absolutely no relationship with this type of terrorist regime.

Each one of us has an ability to say to our lawmakers, no. No we don’t want to participate in the 2022 Olympics, the Genocide Games. No, we don’t want our clothing, food, and entertainment to be tainted by Uyghur blood, sweat, and tears. No, we don’t want the CCP to be allowed to use our platforms of freedom to spread lies and dehumanizing hate to defend genocide. We see what happens when hate is allowed to flourish, which is why we must condemn the CCP and defend all Asians from hate. We know how the CCP has hurt the Chinese people, and can never allow anyone to spread propaganda as they have about racial identity.  The struggle of the Uyghurs is not just about us, it is about the future of humanity and the type of world our children will inherit. For the sake of all, we must say: stop the genocide, or compromise the future of the world.