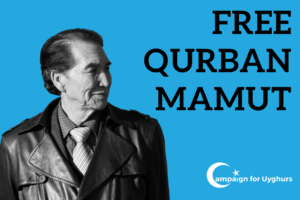 Four years ago, Qurban Mamut vanished from East Turkistan. In 2020, he was confirmed to be detained by Chinese Authorities. As the former editor-in-chief of the official Xinjiang Cultural Journal, Mamut was considered a prominent Uyghur journalist and spokesperson. This follows a pattern of CCP abuse where relatives of those living abroad, especially prominent Uyghur individuals, are detained as part of a larger genocidal effort.

Qurban’s son Bahram Sintash said of his father’s disappearance, “I hope there is no ominous reason why my father’s whereabouts are unknown. My father, Qurban Mamut, was abducted in December 2017. This week marks the fourth year of his disappearance. I don’t know where he is and how he is.  For the past four years, China has not responded to any reports and news about him. China has also not responded to calls from the government, human rights organizations, or my demands on various forums and social media. The Chinese government has not yet commented on the verdict or any other information regarding their hostage. I demand China respond to my questions and to release my father before the New Year.”

It is always with heavy hearts that we mark the anniversary of such events, but it is as critical as ever that these individuals not be forgotten in the effort to see the genocide brought to an end. These names and faces are symbols of the unrelenting destruction being conducted by the CCP in East Turkistan. Their relatives abroad live with no word, no information, and no idea of their safety or whereabouts.

Executive Director of CFU Rushan Abbas said “I know the pain that Bahram feels on  this day. I too have witnessed such tragic anniversaries come and go for my sister and my in-laws. It is an unspeakable crime in itself to detain a person because of their identity and beliefs, but it is even more atrocious to leave their families in the dark as to the status of their relative. This is the story of Uyghurs all over the world, and until this genocide is brought to heel, it will continue to be a shared experience. We are a strong and resilient people, and it is because of that resilience that we mark these days and demand a response from the Chinese state.”