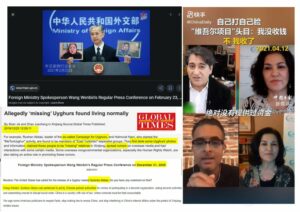 The Chinese regime has consistently sought to smear the names of the Uyghur female camp victims, and has now once again resorted to slander in an attempt to defend the indefensible genocide of Uyghurs.

A video has been published on Chinese State-backed media platforms, including China Daily, which used edited, misconstrued clips from a known propagandist and genocide apologist to attempt to delegitimize Campaign For Uyghurs Executive Director Rushan Abbas. By taking statements made in a previously recorded interview out of context, they attempt to back previously debunked libel used against Ms. Abbas and Campaign For Uyghurs, as well as the work and testimonies of Uyghur advocates and victims. Using a statement referring to a specific CFU’s organizational affiliations at the time of her sister’s abduction, video clips were manipulated to make it appear to have a contradiction when in fact both statements were referring to different points in time.

In the past, Ms. Abbas was subject to libelous content published by Chinese State media. She was also attacked by Chinese Foreign Ministry official Zhao Lijian on Twitter. Additionally, after the abduction of her sister, Dr. Gulshan Abbas, by the Chinese regime, Rushan Abbas was accused of lying about the case, and stealing a photo to invent  a missing relative. This was later proved to be libel when the Chinese Foreign Ministry itself confirmed a prison sentence was given to Dr. Gulshan Abbas.

The Chinese authorities have failed to realize the ways in which actions like this prove what activists have been saying all along: that the facts are against the CCP, and that they have little ground to stand on in defense of their genocide and crimes against humanity. The growing outcry from the international community reflects the building realization of the magnitude of the Chinese regime’s disinformation and brutalities inflicted on Uyghurs and other vulnerable people groups.

Members of the press must continue to call attention to the tactics that are being used by these barbaric officials and propagandists, and to uncover the realities of crimes perpetrated not only against the Uyghurs, but citizens of other countries who use their freedoms to speak out. These types of actions affirm the reality that the regime’s aims are not only to control information and human beings within their borders. They desire to exert control of the narrative, and thus, the power dynamic, across the world.

We call on the international community to take action to protect Uyghur victims, and especially women, who are subject to intense dehumanization and smear campaigns by the Chinese regime. Support the survivors and those doing the hard work to speak truth in the face of evil. By doing so, we will protect the future of our world.