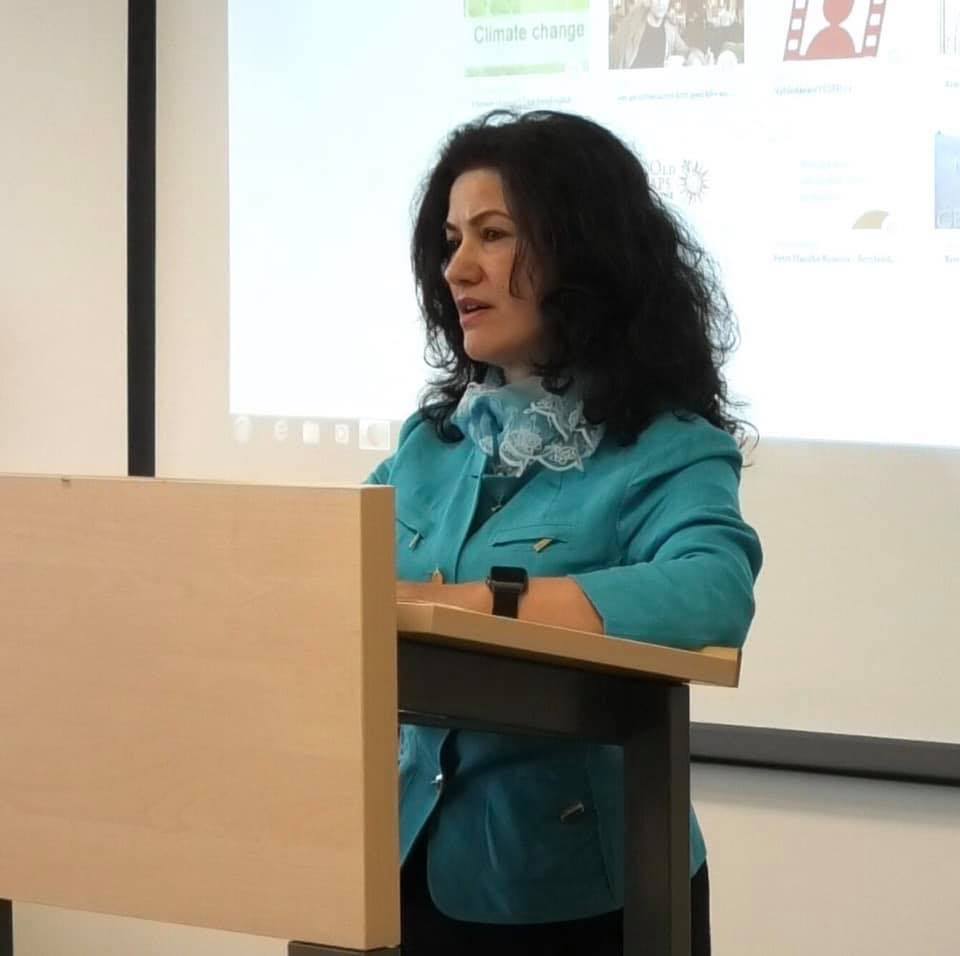 Thanks for giving us this platform and opportunity to address the atrocity of the century.

Since April 2017, millions of Uyghurs have been rounded up by Chinese authorities and sent to large modern-day concentration camps. The camps are the culmination of decades of repressive and assimilatory policies by the Chinese government, as they aim to socially reengineer the Uyghur people. A document quoted the party secretary Chen Quango on detention centers stating the camps should “teach like a school, be managed like the military and be defended like a prison” and “must first break their lineage, break their roots, break their connections and break their origins.” These chilling words stated in an internal document, reported by the media, only touch on Beijing’s harsh policies towards the Uyghurs. The situation is getting worse as the Chinese government continues to get away with their inhumane practices in front of the world community.

The entire region is branded. Punishment is cultural and collective. 1-3 million people in detention are charged with no crime. Counties, districts, and neighborhoods are filling quotas. China has characterized all political resistance as “Islamic terrorism,” and on that pretext developed a surveillance state built on DNA collection, ubiquitous cameras, facial-recognition software, police check points on every corner, GPS tracking devices on vehicles, and QR codes on every home.

The model and the technology underpinning mass repression in Uyghur region is already being rolled out to other parts of China and actively exporting to more than dozen countries around world. This should set our hair on fire. Instead there is nothing more than talk to this day.

According to numerous testimonies, detainees in those camps are subject to food and sleep deprivation, forced medications, organ harvesting, electrocution, rape, and torture leading to brutal deaths; and the dead are cremated to leave no evidence. Massive crematoria have been built throughout the region near the concentration camps for a culture that doesn’t believe in cremations. This is a warning sign, but the world isn’t watching.

I have been very vocal in exposing the atrocities perpetrated by Beijing, the fate of my in-laws, and the conditions of the camps. On September 11 2018, Six days after I gave a speech at the Hudson Institute, here in Washington, speaking out about the Uyghur Crisis, my sister, Dr. Gulshan Abbas, and my aunt, were abducted as a tactic by Beijing to silence me and stop my lawful activism in the United States, under my constitutional rights. China say that these facilities are vocational training centers teaching courses such as clothes making, electronic assembly, and the Chinese language. But my sister speaks fluent Chinese, and was a medical doctor working at a state-owned hospital before she retired due to personal health issues. Now, she is in the camps today, subject to torture and forced labor, if she has even survived the horrendous situation of the camps for this long. Unfortunately, she is just one example of millions of Uyghurs who are undergoing slave labor conditions, forced indoctrination, and forced to denounce their religion and ethnic identity.

Famous or well-known Uyghurs, and anyone with a voice, have been silenced in an attempt to completely eliminating anyone who might produce, extend or defend Uyghur ideology and values. Uyghur philanthropists, intellectuals, professors, writers, doctors, and entertainers are locked up. At least 450 identified Uyghur elites have been imprisoned or forcibly disappeared.

According to the Chinese media, currently, 1.1 million Chinese cadres have been deployed to Uyghurs’ homes to live in local Uyghur’s living rooms, dining areas, and bedrooms, and they are coercing Uyghur children to spy on their parents.

Thousands of Uyghur children have been forcibly separated from their families and put into state run orphanages to assimilate them into Chinese culture. Many male Uyghur detainees have been moved to China proper or have disappeared. With Uyghur men gone, Uyghur women are being forced to marry Chinese men with government gratifications such as money, housing, and jobs. Neither the girls nor their families are able to reject in fear of repercussion.

In their action, the PRC is killing four birds with one stone:

1. Forcing millions of Uyghurs into slavery, forcing them to work on production.
2. Dislocating Uyghurs’ from their homes, neighborhoods and towns, to make room for Han Chinese settlers and opening the land for the Belt and Road Initiative.
3. Jailing Uyghur men in camps and prisons and forcing unwed and abandoned Uyghur women to marry Han Chinese men.
4. Orchestrating Organ farms, where millions are forced to undergo DNA tests and prepped for slaughter. The human rights organizations in the world need to pay attention to and take the lead against the PRC’s Organ Slavery trade practice.

Ultimately, their policies reduce the Uyghur population making room for Han Chinese settlers, dislocate families, and forcefully assimilate those who are not being used for slavery.

Beijing’s human rights abuses do not stop in East Turkestan; they are influencing the entire Uyghur Diaspora directly in many ways. Uyghur Americans from Texas to New York, from Virginia to California, are sick with worry and despair. They can’t communicate with their families. They do not know whereabouts of their loved ones. The current harsh situation in East Turkestan is affecting their work, schooling, daily activities, emotional state and health. Helplessness, obscurity and depression are growing. Many young students abroad no longer receive the funds sent by their parents back in East Turkistan for their school, room and board, because the Chinese Government has stopped all money transfers abroad, frozen financial accounts, or simply detained their family.

Uyghurs in diasporas are not only facing extreme emotional anguish, but also facing bogus accusations and threats. China is coercing and rewarding individuals to discourage and disrupt any political movement among the overseas Uyghurs. Beijing is extending its oppression with its black tentacles to the Uyghurs living abroad, jailing and threatening our families and using them as pawns against us.

What is happening today to the Uyghurs is common knowledge by now. We have been crying out for help for years. Nevertheless, still no action. The world is muted in the face of these crimes against humanity, but our government must lead in action. Today, with Communist China’s aggression as a totalitarian regime, it is not only the fate of the Uyghurs at stake, but also everything we have worked for in the past 100 years. It endangers our western democracy and our national security.

The Uyghurs are targeted because our homeland lies in the center of the Belt and Road initiative. They are slaughtering Uyghurs to make a clear path to Western Europe. It is no secret that China created militarized islands on top of coral reef reserves in the South China Sea. This land grab effectively extended their sea territory and increased tensions over disputed waters. Keep that in mind when looking at the Belt and Road Initiative (BRI)’s projected path so you are not surprised. Control over key sea passages will choke out economic competition in the area and enhance China’s authority in the Indo-Pacific region. From North to South, and East to West, China’s growth and thirst for power is ceaseless.

China has been using its massive economy to control and manipulate other countries and the United Nations, as the second largest donor. China is under-going massive infrastructure projects and giving out large loans to poor countries, and then using this economic relationship to their advantage. This has been coined debt trap diplomacy for a reason. Manipulation and bullying in the United Nations should not go unchallenged. The United Nations loses its power and effectiveness when internal politics are conducted as such.

To combat the backlash about the Uyghur Crisis from western countries, the Chinese government uses this economic power to force other countries to pick a side. Whenever they receive backlash about their human rights abuses and the concentration camps, china pressures other countries that they have economic advantage over to make a statement in order to weaken the opposition. Economically dependent countries are supporting China’s actions or simply turning a blind eye. China is using this economic pressure to manipulate them politically.

An example of this is the July 10th joint statement signed by 22 countries, which later increased to 24, mostly western democratic countries issued to the UN condemning China’s so-called “Uyghur Detention Centers”. As a response 37 countries released a letter defended China’s treatment of the Uighurs. The United States did not sign either statement. Silent countries waited for the United States to make an action, for the Unites States to take a stand. And when it didn’t, the numbers of countries supporting china’s genocide increased from 37 to 50. What if those countries are 100 or 150? China is spreading its communist ideologies and it’s influences around the world. This threatens democracy, freedom, and our national interest.

Nazi Germany’s first concentration camps were built in 1933. Twelve years later, in 1945, Germany issued its unconditional surrender, with an estimated death toll of over 6 million Jewish people. In the beginning of the holocaust, countries around the world continued to do business with Germany, enabling their economies while millions of innocent people were being attained and held in concentration camps. They avoided acknowledging Nazi Germany’s human rights abuses for the sake of economic trade, at the cost of millions of lives. But back then, access to information was slow, and they easily hid behind claims of ignorance. Now, we know what is happening to the Uyghurs today. We cannot claim ignorance.

China is an economic superpower. Its growth potential is limitless. And right now, millions of Uyghurs are collateral damage to international trade policies that are enabling China to continue to murder the Uyghur people. Enabling them to continue its police state in the Uyghur region, and enabling them to threaten our freedoms around the world. Continuing to do business as normal with China today is being complicit with genocide and supporting the spread of totalitarian communistic systems to the world.

We appreciate the strong words coming from the State Department, Secretary Pompeo, Speaker Pelosi and Vice President Pence, but at some point, words are not enough—action is needed. If we fail to challenge Communist China on this terrible atrocity with the determination to stop it, it will be the beginning of darkness in accountable democracies as totalitarian governments effectively utilize mass surveillance and repression to instill fear at home and abroad, depressing actions even within the free world that we enjoy today. If we do not act soon, China’s debt trap tactics, trade threads, expansion of its BRI, manipulation in UN and provision of 5G technology to the West will position China to treat the entire world’s population according to its vision for the Uyghur region.

Today, it’s not just about the freedom of religion to the millions incarcerated in China anymore. It’s about existence. It is about survival. We have been pleading to the world leaders, politicians, NGOs and civil societies to act against the Communist China’s cruelty to end the mass atrocity. I do not know what it takes to get the attention of world leaders for action. Do not let it come to mass executions and gas chambers.

Thank you for your time, and please, be the ones that save us from a world where Communist China is the leading power.