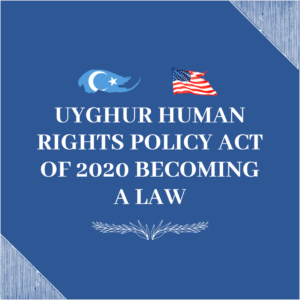 Today President Donald Trump signed the momentous Uyghur Human Rights Policy Act into law. It is a remarkable occasion because of what this moment represents for an entire race of people who have been unimaginably oppressed. Campaign For Uyghurs (CFU) is humbled by the multitude of people who have stood with the Uyghur people, and for the remarkable bipartisan action to condemn the genocidal actions of the Chinese government. CFU would also like to thank everyone who worked tirelessly to make this happen and express our gratitude to all the legislators who gave their support.

As we celebrate one victory on the long path that still lies ahead, we grieve the countless people who are still suffering. It must also be somberly noted that the continued suffering of citizens of Hong Kong marks another group of people who have been simultaneously betrayed. As they were always promised autonomy under the “one country two systems”, we all have now seen that the Chinese government has no qualms or moral bottom line and cannot be trusted by anyone. Nothing has changed since the Tiananmen Square massacre that we marked a couple of weeks ago. This ought to serve as an important reminder for the world: laws alone will not protect innocents. Laws must be enforced under the principles of justice, principles that China as a nation will never comprehend or acknowledge while the Communist Party remains in power.

Senior advisor for the World Uyghur Congress and Campaign for Uyghurs, and Honorary Chair of Uyghur Academy Dr. Rishat Abbas noted, “I am thrilled to see President Trump and the U.S. government stand up for the Uyghurs facing genocide in East Turkistan. Today’s signing of this legislation sends a strong message to the Chinese government that the U.S. will not remain silent. While Uyghurs in diaspora celebrate the great news, they still worry for their loved ones as over 3 million people, including my sister, Dr. Gulshan Abbas, are held in concentration camps. We hope to see more countries pass similar legislation, so this pressure continues to build. China must realize the consequences of its gross violations of human rights.”

There must be swift and continued unified action from the American government and all peace-loving nations across the world to act against the Chinese government officials who are complicit in these atrocities. They must not be allowed to continue to enjoy the benefits of free societies while denying it to millions of human beings. It is also our continued hope that companies across the world will be held accountable for deciding to profit off of the slavery and blood of Uyghurs. While the reality is that no country is utopia, we are incredibly thankful today for the victory accomplished by democracy in action. May the encouragement of this ability under freedom to effect positive change spur us all to continued integrity as we fight for the human rights and dignity of the Uyghur people.