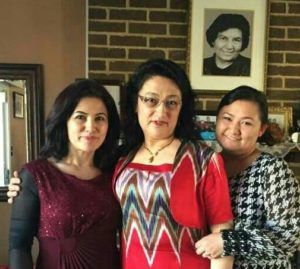 After over 21 months of no news on the disappearance of Dr. Gulshan Abbas, Radio Free Asia has confirmed via her former place of employment that she is in Chinese government detention. Previous inquiries with Urumqi police on her whereabouts were met only with responses that it was a Chinese “state secret”. Having committed no crime, we know that the only “secret” is the need to hide the fact that the Chinese government is kidnapping innocent citizens as a retaliatory act.

While her family is relieved to learn that she is alive, like many Uyghurs who are in similar hostage situations, they have extremely mixed feelings as their relief is also met with extreme concern that she is in detention, especially since the Chinese government still has not released any information about the reason for her arrest, or the current state of her delicate health.

It is clear by this third-party confirmation that, as suspected, the Chinese government is using this innocent woman as political leverage, a despicable and blatantly terrorist action.

On the news, her sister, CFU Executive Director Rushan Abbas, said, “I have known that her forced disappearance was a response to my advocacy work in the United States. As a highly educated professional, she is quiet, non-political, who is living a simple life with her very limited social network, and she should not be subject to any re-education or vocational training. Again, the Chinese government must stop these draconian policies which are reticent of the horrors of the Cultural Revolution on an even grander scale. We are asking for something so simple: do not harm my sister and innocent civilians due to a family member’s actions of speaking out against genocide. These actions by the Chinese government show China to be the least civilized nation on the earth by these atrocious crimes against humanity.”

To this date, the fact that news had to be confirmed by the hospital she used to work at, and not by any police or government officials themselves, shows yet again the cowardice and darkness that has consumed the officials who are terrorizing Uyghurs in East Turkistan. Once again we call on the Chinese government to do the right thing. By continuing to inflict pain on millions of people, and in doing so, heap guilt upon themselves, they will cause China to fall permanently on the wrong side of history.