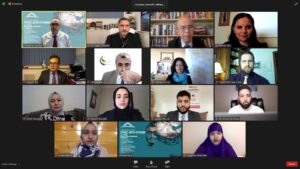 (Rushan Abbas on December 17, 2020) EssalamElleyum brothers and sisters.  I hope that you will hear what I have to say today with consideration. Remember that a true friend will speak the truth, even when it hurts. Should the value of the ummah be lessened by political allegiance? The Uyghurs are being deliberately cut off by a lack of support from Islamic countries. The Muslim communities are also victims of China’s massive campaign of lies. As our Muslim brothers and sisters are educated about what is happening to us, we hope that they will stand with us. We despair for Muslims across the world, and as I try to warn them of the reality that they will be next, I am often met with hostility. China has a track record of buying and bullying. In reality, the Chinese regime is the enemy of all humanity, and the genocide of the Uyghurs is not China’s internal issue, but it is a humanity issue!

I can attest to this, as my own sister has been abducted by the regime as retaliation for my advocacy for the Uyghurs. For over 2 years, there has been no news of her.

Look at how China’s genocidal campaign is targeting other groups and wake up! This will not stop with the Uyghurs. Every area the BRI runs through, leaves a trail of Muslim blood behind. Myanmar, the slaughter of Rohingya Muslims has been driven by China’s Belt and Road Initiative. This conflict has been fueled by China pressuring their leader to push out the Muslims in the area to make way for the BRI. Videos have come out of Arab Muslim children from the Middle East, singing the Chinese anthem, the words of which are contrary to the Islamic creed! They are pledging allegiance to the Chinese state by doing so and rejecting the call to be slaves of Allah! Remember our warnings! To the leadership of Muslim countries in Africa, in the Middle East, and Pakistan, I ask this: when an atheist regime that doesn’t believe in any religion, and which does not view others’ lives as equally valuable is given economic control in your countries, do you think this will end well? Do you realize that China is already not only controlling your conscience and freedom of expression but is actively expanding its authoritarian empire in your country as well?

The OIC has allowed itself to comply with China’s narrative. Many of the participating countries are directly complicit in the genocide by their participation in the BRI, among other things. We must recognize that China has been waging a war on religion, a war on Islam! The Chinese regime has declared that they must, Astaghfirullah, rewrite the Holy Quran. The Chinese regime is functioning as the most Islamophobic country in the world, but hiding this image by paying for the construction of mosques in African nations they wish to colonize! Nothing is free in life, and for the CCP, the cost will be as high for these nations as the human cost of the tragedy of the Uyghurs has been!

We urge the OIC to wake up, before it is too late!  Hear our supplications and do not let your guilt or the lust for money be counted as greater than the value of Muslims’ lives. We thank countries like Turkey that spoke at the OIC meeting to express their concern, but we need more urgent action! Do not be stained by further complicity in the genocide and colonial brutalities of China’s bloodthirsty ambitions. Please use your voice to cry out with us not just to help us but to help yourselves!  Thank you.