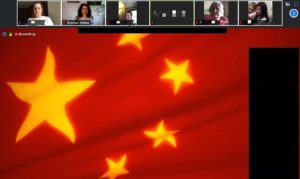 On May 17th, 2020, Amnesty International USA Local Group 37 hosted a virtual meeting and featured CFU’s Executive Director, Rushan Abbas, who presented on the Uyghur genocide. It was a successful presentation with a lot of involvement from everyone who attended. Many were moved by Rushan’s personal stories, disturbed at the oppression Uyghurs are experiencing both in East Turkistan and abroad, and moved to further action. Given that concentration camps and crematoria are being established in the 21st century took many by surprise. It is these shocking truths that more people need to be aware of.

While the meeting overall was successful, it did not go smoothly as the presentation was hijacked by “zoombombers.” While the disgusting tactics used to disrupt meetings is not entirely unfamiliar, the particular choice of the hackers to play a video of the Chinese national anthem was especially disturbing in this context. As Rushan Abbas affirmed in the meeting, “These are the tactics of the Chinese Communist Party displayed for you today. This is what we are dealing with.” Reports have surfaced on Zoom being an unreliable platform for holding meetings, underlining that it’s “significant weakness” is in its “non-standard type of encryption” and the fact that information is being transmitted through China. While we live in a time of freedom of speech, China has made massive efforts to disrupt those freedoms and interfere with us revealing the true intentions of the Chinese government.

CFU remains resolute in our commitment to carry on in spite of any such disruptions. There is too much at stake to stop or be silent, and the more such tactics are employed to stop the message, the more the world realizes the true character of the Chinese Communist Party.