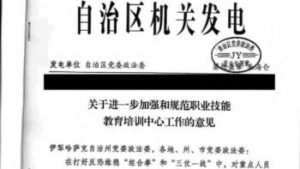 Newly leaked Chinese government documents include the first known “manual” for operating internment camps in the Xinjiang Uyghur Autonomous Region (XUAR), providing local authorities with guidelines on how to prevent escapes, keep the program a secret, and use “points” to grade detainees.

An “Autonomous Region State Organ Telegram,” issued in 2017 and signed by then ruling Communist Party deputy chief and head of security for the XUAR Zhu Hailun, is one of several classified documents known collectively as “The China Cables” published on Sunday by the International Consortium of Investigative Journalists (ICIJ), a collaboration with 17 media partners in 14 countries.

The document explains that in the interest of fighting terrorism and maintaining stability in the region, authorities must focus on implementing “free vocational skills education” through “training venues” established for the local population, and lays out rules for running the facilities, which are more commonly referred to in the West as internment camps, due to their coercive nature.

Authorities are believed to have held 1.8 million Uyghurs and other Muslim minorities accused of harboring “strong religious views” and “politically incorrect” ideas in the camp system since April 2017 amid a policy of mass extrajudicial incarceration in the region, although Randall Schriver, who leads Asia policy at the U.S. Defense Department, has said the number could be “close to 3 million citizens.”

In the document, local authorities are provided with a list of security measures that include instructions to “strictly manage and control student activities to prevent escapes during class, eating periods, toilet breaks, bath time, medical treatment, family visits, etc.,” and to ensure that anyone who must leave due to illness or other circumstances have someone assigned to “specially accompany, monitor and control them.”

Camp authorities are told to “evaluate and resolve students’ ideological problems and abnormal emotions at all times,” while preventing detainees from contacting the outside world by confiscating their cellphones and keeping them constantly monitored.

“There must be full video surveillance coverage of dormitories and classrooms free of blind spots, ensuring that guards on duty can monitor in real time, record things in detail, and report suspicious circumstances immediately,” it said.

The documents instructs camp authorities to carry out a daily study of Mandarin Chinese, national law, and “skills,” and to carefully apply “ideological guidance” as part of an indoctrination of detainees, while also strengthening their “daily life behavior norms” in areas that include “getting up, rollcall, washing, going to the toilet, organizing and housekeeping, eating, studying, sleeping, closing the door and so forth.”

Detainees should also be graded according to a “classification and points management system” to determine what kind of progress they are making.

“Maintain monthly assessments, and calculate monthly and annual total scores, and record it in the student’s school files,” the document says.

“Take the student’s score as the basic basis for measuring the effectiveness of education and training, and link it directly to rewards, punishments, and family visits. Implement level management and differentiate treatment according to the score, and encourage students to obey management, earnestly study, and truly transform.”

The scores should assist authorities in determining whether those held in the camps have completed their indoctrination, the document says, and while each camp is given the freedom to set up its own criteria to qualify for release, detainees must have been “educated and trained in the training center for at least one year” before they can leave.

Lastly, the document urges camp authorities to adhere to “strict secrecy” about the camp system.

“It is necessary to strengthen the staff’s awareness of staying secret, serious political discipline and secrecy discipline,” it says.

“It is strictly forbidden to bring video and video equipment such as mobile phones and cameras into the teaching and management areas and uploading pictures onto the internet at will. Relevant important data should not be aggregated, not be disseminated, and not be open to the outside.”

The newly leaked document provides one of the most comprehensive looks at how camps in the XUAR are run, and runs counter to Beijing’s narrative that the facilities are “boarding schools” that provide vocational training for Uyghurs, discourage radicalization, and help protect the country from terrorism.

Reporting by RFA’s Uyghur Service and other media organizations has shown that those in the camps are detained against their will and subjected to political indoctrination, routinely face rough treatment at the hands of their overseers, and endure poor diets and unhygienic conditions in the often overcrowded facilities.

The document was also leaked along with four shorter Chinese-language intelligence briefings, known as “bulletins,” that provide guidance on the daily use of a mass-surveillance and predictive-policing program that analyzes data from the XUAR.

The leak came a week after The New York Times published a 403-page trove of documents it said were released by someone within the “Chinese political establishment” that told of how Chinese President Xi Jinping called for an “all-out ‘struggle against terrorism, infiltration, and separatism’ using the ‘organs of dictatorship,’” in internal speeches following an attack by Uyghur militants that killed more than 30 people at a train station in 2014.

While it was unclear how the documents, commonly referred to as the “Xinjiang Papers,” were selected, the Times said that the leak came from an official who requested anonymity and expressed hope that their disclosure would hold party leaders, including Xi, accountable for policies in the region.

Following ICIJ’s publishing of The China Cables, the Chinese embassy in the U.K. held a press conference on Sunday denying the existence of “detention camps” in the XUAR, and repeating claims that the facilities are vocational education and training centers established to prevent terrorism.

However, Lisa Tassi, London-based Amnesty International’s Campaigns Director for East Asia, on Monday called the latest leak “yet further proof of [China’s] systematic persecution of ethnic and religious minorities in China on a sickeningly vast scale,” and suggested that Beijing’s continued denial of the existence of the internment camps is “ever more futile in the face of ever-mounting evidence.”

“With each passing week, the world learns more about the horror China is unleashing on its own citizens in Xinjiang,” she said in a statement.

“It is time for the Chinese government to ditch its feeble counter-narrative, including the claim of providing ‘vocational training’ to people in the camps. Instead they should provide immediate answers to the hundreds of thousands of people desperate for information about their loved ones.”

Tassi said that if China has nothing to hide, it should allow independent human rights monitors immediate and unfettered access to the XUAR—something it has refused to do, despite repeated requests from rights groups, Western governments, and the United Nations.

“These damning leaks should be the catalyst for the international community to increase pressure on the Chinese authorities to end this human rights catastrophe,” she said.

Mass incarcerations in the XUAR, as well as other policies seen to violate the rights of Uyghurs and other Muslims, have led to increasing calls by the international community to hold Beijing accountable for its actions in the region, where Adrian Zenz, senior fellow in China Studies at the Washington-based Victims of Communism Memorial Foundation, said in a report over the weekend that the number of camps is likely “between 1,300 and 1,400.”

U.S. Secretary of State Mike Pompeo last month singled out China as one of the worst perpetrators of abuse against people of faith, particularly in the XUAR.