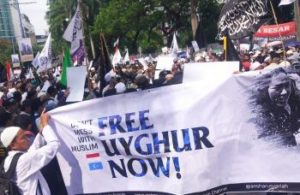 Since 2017, as many as 800,000 – 1.8 million Uyghurs and Kazakhs have been “disappeared” into a widespread system of “reeducation camps” in the Uyghur Autonomous Region (Xinjiang). Nearly all Uyghurs and Kazakhs in China have an immediate family member who is interned in this camp system. This process resonates with the most horrific moments in modern history. In the past such camp systems have resulted in generational trauma and social elimination. They shattered families, destroyed native forms of knowledge and, at times, resulted in mass death. Come for a heartfelt presentation by Uyghurs whose family members have disappeared into this system and Dr. Darren Byler (University of Colorado) an anthropologist who has done ethnographic research in the Uyghur community for the past decade.

Darren Byler is a postdoctoral researcher at the Center for Asian Studies at the University of Colorado, Boulder, where he studies the technology and politics of urban life in Chinese Central Asia and around the world. His writing has appeared in Logic, The Guardian, and ChinaFile among other publications. In addition he edits a website, livingotherwise.com, that focuses on the Uyghur human rights crisis.