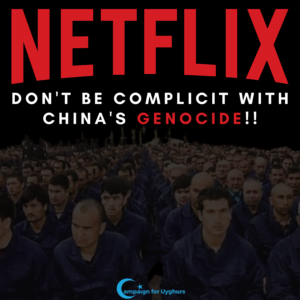 Campaign for Uyghurs calls on Netflix to reconsider a deal adapting a science fiction novel by Chinese author Liu Cixin for the screen. Mr. Liu once said that “Sci-fi novels are concerned with problems faced by all of humanity.” He has contradicted this message by becoming a genocide apologist. Mr. Liu plainly repeated Chinese Communist Party propaganda regarding the genocide by saying: “If anything, the government is helping their economy and trying to lift them out of poverty.”

In light of his expressed views, Campaign for Uyghurs is outraged to hear that plans are in motion for this screen project, which was announced by The Hollywood Reporter on September 1st. It is completely unacceptable for someone to support the 21st century’s modern genocide. It is even more shocking that a supporter of this genocide is being rewarded with a film deal. Racist ideologies that lead to mass atrocities are clearly recognizable in Mr. Liu’s statement, and it is concerning that these murderous viewpoints could be overlooked. CFU Executive Director Rushan Abbas asked, “If an author defended and supported Nazi Germany’s Holocaust of 6 million Jews, would Netflix still continue with a ‘business as usual’ approach?” She continued that “Avoiding support for an author who defended China’s genocide of the Uyghurs should be considered common decency, and choosing to produce his work should be viewed as direct complicity.”

Campaign for Uyghurs calls on Netflix to immediately terminate this unacceptable alliance. It is appalling that any of the aforementioned, and particularly an influential platform like Netflix, would consider it acceptable to produce work for communist China, and we sincerely hope that Netflix will choose to stand on the side of humanity. Liu Cixin’s pathetic attempts at justifying the detention of millions of Uyghurs should give pause to anyone with a conscience, and the Campaign for Uyghurs sincerely hopes that this grievous insult to the idea of human rights will be corrected.