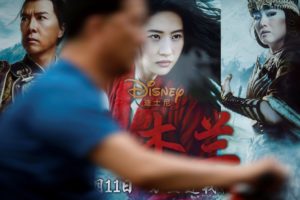 A man rides past an advertisement promoting Disney’s “Mulan” at a bus stop in Beijing on Wednesday. (Carlos Garcia Rawlins/Reuters)

Op-ed written by Ziba Murat for the The Washington Post

Ziba Murat is a Uighur American residing in Virginia. Her mother, Gulshan Abbas, disappeared in September 2018.

Like all little girls, I was captivated by the stories of Disney princesses as a child. My childhood was not so different from others in that respect. What set it apart was that I was born in Urumqi, the capital of Xinjiang Uighur Autonomous Region in China. My people were not treated with respect or human dignity and faced constant brutality because of our race in our own homeland. This brutality has only accelerated in recent years, as Chinese authorities detained more than 1 million Uighurs in concentration camps as part of a campaign of genocide.

The pain I have faced could never make a good Disney movie. For a successful Disney movie plot, we need a villain who is served justice and a heroine who eventually triumphs. But in my reality, the villain is now rewarded with money, fame and power, while I struggle for the tools to ensure good triumphs over evil.

My mother, Gulshan Abbas, a Uighur retired medical doctor, was abducted from her home in Urumqi on Sept. 11, 2018. Urumqi is just 119 miles from Turpan — a city that is credited in the recently released live-action Disney interpretation of “Mulan.” (The credit sequence of the film thanks Turpan’s public safety bureau, which is responsible for the camps in the area, and other government entities in Xinjiang.) For the past two years, I have struggled to get any information on my mother’s whereabouts, and I can’t help but wonder if my mother is being held in one of the concentration camps in Turpan.

Our homeland is beautiful and picturesque in many ways, boasting ideal scenery for shooting a movie. But it is also a place where journalists do not have access, information is censored and criticism is silenced. I myself have been denied any information about my mother’s condition or location. My mother believed that living a simple, peaceful life in service to others was the only protection from trouble she needed. But trouble came to find her all the same. This trouble was aided and funded by corporations that valued Chinese blood money more than integrity and human lives.

The most crushing reality of all is that Liu Yifei, the actress who plays Mulan, has used her platform to speak against freedom and support the totalitarianism of the Chinese Communist Party. As an immigrant to the United States, I wish I could rejoice in her success story, but I don’t relate to her and her decision to use the platform she has in the United States to defend a system that oppresses so many. The idea that she may have filmed the story of Mulan in the land where my mother could be imprisoned in a concentration camp is devastating.

I am a proud Uighur American, and I understand something that all the money in the world can’t buy: the value of freedom. Is it too much to ask that Disney not support the ideology that has likely made my mother a slave and a prisoner in the modern age?

The words that scrolled across the credits of the film thanking the perpetrators of genocide — the ones who may have enslaved my mother — are shocking. It is appalling that the same minds that create iconic worlds with heroes and villains do not consider the morality of the stories they sell in the real world. I am left asking: Do the characters of the movies of my childhood exist in real form? Are there any willing to take on the villain in the modern age?

Where does this leave you, as readers and potential consumers? To be momentarily moved by the magic of this film is to be wrapped up in a dangerous illusion. I ask that you choose instead to be moved by the very real struggle of humans whose lives do not exist on the screen.

If Disney can make millions in profits from whitewashing a land racked by genocide, can it buy my mother’s freedom?