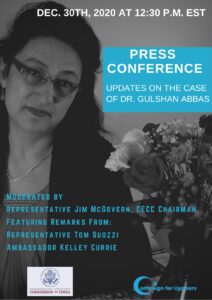 From Congressional-Executive Commission on China (CECC):
(Washington, D.C.)— Members of the bipartisan, bicameral Congressional-Executive Commission on China (CECC) will conduct a press conference with Campaign for Uyghurs to highlight the case of Dr. Gulshan Abbas, who was reportedly given a harsh 20-year prison sentence, and other crimes against humanity occurring in the People’s Republic of China. Members of Congress and Campaign for Uyghurs believe the sentencing of Dr. Abbas is likely retaliation for the efforts of her sister (Rushan Abbas) and brother (Dr. Rishat Abbas) to publicize the mass internment and other atrocities occurring in the Xinjiang Uyghur Autonomous Region.

What:​ Virtual press conference on the case of Dr. Gulshan Abbas and other crimes against humanity occurring in the Xinjiang Uyghur Autonomous Region

Who:​ Congressional-Executive Commission on China and Campaign for Uyghurs