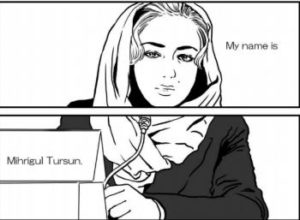 A comic by a Japanese artist based on the testimony of a Uyghur woman who was detained and tortured in China after giving birth abroad, has gone viral on social media.

Titled “What has happened to me,” the Japanese comic by Tomomi Shimizu, 50, illustrates the account of a Uyghur woman who, upon returning to China after giving birth to triplets in Egypt, was detained and tortured on three separate occasions between 2015 and 2017.

The comic, which has received around 2.5 million views and over 86,000 retweets since it was posted on Twitter in late August, has since been translated and distributed in multiple languages, including English, Chinese and Uyghur. It has also appeared in the streets of Hong Kong, where clashes between protesters and police have grown increasingly violent over the past few months.